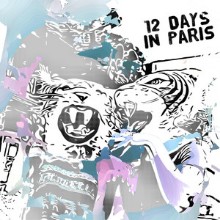 It’s a step in a new direction for triple-threat Daniel Durston!

In the quick-fix world of 2018, where singers and bands struggle to make it big in the industry without any kind of jumpstart or help, it takes real desire and effort for them to express their character and personality. Artists often use music as a therapy, a way to express their emotions and let out their frustration, and that’s exactly how and why actor/singer/songwriter Daniel Durston started writing songs with his long-time friend Jonathan Espinoza. The pair met at a 24-hour diner and started writing music to help Durston through a hard time. They wrote so much they decided to record some of their songs and put them out.

The pair worked tirelessly, texting and emailing each other voice memos back and forth when they couldn’t be together and recording in a homemade studio in a cabin up in Lake Arrowhead, CA when they could to create From Who I, their debut EP released March 9 via Sunstar Records.

With From Who I, the indie pop-folk duo introduces themselves in the best way possible. Listening to the EP is easy, and though songs like their single “Communication” or their collaboration with Jacob Steele, Olivia Kuper Harris and Well Written “Distant” are absolute treats, you have to listen to the eight tracks to really see all the nuances of what 12 Days In Paris are capable of. Each of the songs echoes the pair’s very broad musical backgrounds, going from pop ballads such as “Magazines” to dynamic guitar-driven tracks like “Gravity”.

The band’s first effort is punctuated with studio conversations, giving listeners an insight as to how each song came about. Musically speaking, I am a big fan of the fact that Daniel and Jonathan featured saxophone solos by Tom Zmuda and trombone solos by Youtube’s Paul The Trombonist on several tracks of the EP. It gives the whole record a jazz vibe that you all know I dive right into every. single. time.

With these 8 tracks, 12 Days In Paris don’t let a moment pass them by. With songs as good as this, I dare you not to smile, clap, tap your foot or nod along.

Check out the EP below, with an exclusive Track by Track by lead singer Daniel Durston, and find out more about 12 Days In Paris in the March Issue for Stage Right Secrets Magazine.

I used to work on a cruise ship, playing bass for a 1980’s inspired musical (FTR: The Brat Pack), life on a cruise ship is a lot harder than most people would think.  You’re essentially trapped on this thing with a room roughly 4 foot by 8 foot. With one other person, you share a toilet with a shower head just above it, the shower being 3 foot by 3 foot. Not ideal.  Point is, it’s tough, but I enjoyed performing in the show.  I came to realize I wasn’t so happy there, I mean this is month one out of 6! So I knew I had to change some things up. On our day off I went to a music shop and bought this beautiful Mini Martin guitar.  As soon as I got back to the ship, I felt so at home, so happy.  I began writing and the very first song I wrote was “Home”.  I wasn’t happy living on a ship, so I wanted to write a song that countered how I felt.  This song touches on the idea of a happy Home can be built anywhere your loved one is.  If you truly love the person, you can be anywhere in the world and be happy because you find your home in their heart, in their hands and in their arms.

I wear my heart on my sleeve, so when I fall in love, it’s obvious and it’s evident that person means the world to me. So, because of this, breakups are always extra heavy. Once healed from a breakup I often move on and find another lover, who’s even better than the last (I mean, that’s the goal right??)  Well, this song is about having fallen in love, having broken up, and some time down the line you run into that person. You share a moment together, both putting up their guards and just trying to remain cordial and not let your heart get the best of the moment. All the while, you can’t help but think “they must still have feelings for me, I can feel it, why won’t they just say it.” If you’re like me, my mind will explore til I go crazy, so in these moments I think of all the love we’ve yet to tap and how great the future could be if we’d just let down our fences and love again.

“Distant” is exciting for us because I got to feature three different extremely talented artists on the vocal front.  Jacob Steele opens the track, Olivia Kuper Harris graces us with her second verse and ad-libs throughout, and we end the track with this amazing rapper Well Written, who’s written his own verse for this song.

My favorite thing about this song is, Jon and I had met in a city roughly an hour away from our homes, although we were gonna meet to write more, we had to drive home in our separate cars. We were pretty bummed about it so I told Jon “on our drive home, we should each write a song and finish the lyrics and melody by the time we get to your house”.  This made sitting in traffic a lot more bearable.  On that drive I ended up writing Gravity, he ended up writing another that will be on an EP in the near future! The original song is guitar and electronic beat driven.  For this EP we chose to keep it more raw and organic with just a ukulele and feature some amazing Flute & Sax by our dear friend Tom Zmuda.  It’s a great ending, check it out!

This song is special to me because I wrote it in this style so it can take us back to the days when a simple guitar and one voice was big in music, the emo/acoustic era where all that mattered was the honesty in the lyrics.

“Magazines” is written about falling for a new friend who’s already in a relationship. There are times I’ll meet a girl, I end up catching feelings for her and I can see in her actions, her energy, and her photos online that she isn’t as happy with her boyfriend as she used to be. So we wrote this song from the chivalrous point of view we come from, saying, if you’re tired of not being wanted, I will build a new home, a new relationship and treat you the way a princess should be treated. And musically, I’m a huge fan of the trombone solo, performed by YouTube’s Paul The Trombonist!

This song is one of the first songs Jon and I collaborated on. He didn’t want to touch the lyrics because they’re so personal to my life but he had some key moments in the melody and the idea of adding trombone and saxophone to the track!  Stellar featured work by Paul The Trombonist on trombone and Tom Zmuda on saxophone.

This song is inspired by breaking it off with one love and life sometimes handing you the next love right in front of your eyes.  Not a rebound, but an actual potential love. In Commutation, we talk about how in a new relationship you might afraid to be the first to admit falling in love with the person because you don’t know how they will react to it.  So we tell ourselves “I’ll fall in love with you if you fall first.