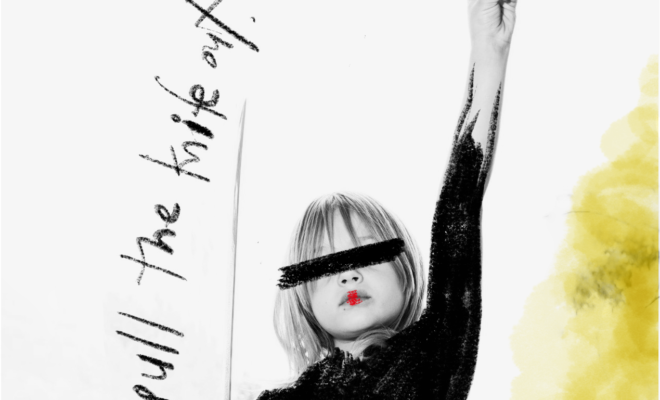 Indie rock duo, TWO, comprised of Aja Volkman and Dan Epand have just released their debut EP, Pull the Knife Out. In seven tracks, TWO takes us through the ins and outs of life, love, and femininity. The opener, “Live Forever More” is a delightful tune filled with birdsong and acoustic guitar. The way in which the lyrics are spoken resemble the bridge of “Clumsy” by Fergie in the best way possible. The entirety of the EP consists of incredibly catchy songs that will live inside your head for days at a time, but this may be the catchiest of all.

“Cage Fighter” really puts the “rock” in “indie rock” with powerful drums and strong vocals. The EP plays around with different sounds and creative ways to make music but still somehow feels cohesive while all being so different. TWO’s creative vision comes to life in the journey that is listening to Pull the Knife Out.

“In This Rough” is a synth heavy tune and steps away from the folky feel of some of the other tracks. In many ways it feels very similar to Reputation era Taylor Swift, and Nashville based band, Wildeyes. Volkman showcases the power in her voice so effortlessly in this track, pulling listeners in and leaving them wanting more.

“Phoenix” is very similar to “Live Forever More” as it begins. With record static in the background it feels very rustic. TWO brought out all the stops for this track including, snaps, claps, and a strong drumbeat. The chorus takes this tune to a whole different level. It’s extremely powerful and catchy as well as short and sweet. “Phoenix” has the potential to be the empowering theme song of the summer.

The album has an interlude of sorts with “Whoa Man.” The softness of Volkman’s voice coupled with the inspiring words she speaks is lovely and relaxing.

Track six is called “Faces” and the lyrics “I have too many faces” are reminiscent of the entire EP and how each song is a different face. The versatility presented in Pull the Knife Out is truly impeccable. Each song is its own “face” and although all so different, they tie together perfectly to create one seamless EP.

The final track, “Crazy Love” once more highlights the beauties of synth. The vocal rasp that comes so effortlessly to Volkman makes for an intense, upbeat track that leaves the listener wanting more.

You can listen to Pull the Knife out here: https://ffm.to/pulltheknifeout