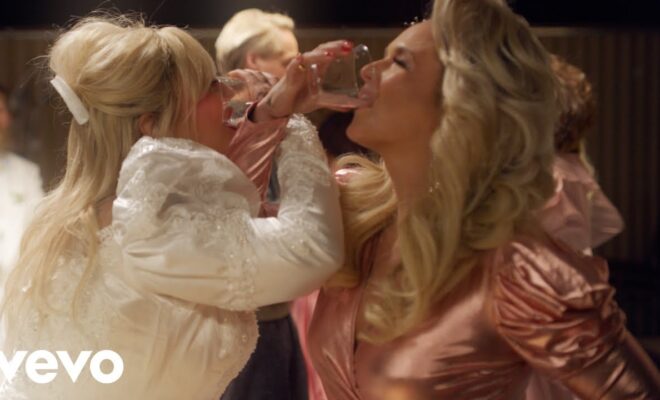 Miranda Lambert and Elle King teamed up for the ultimate badass country track with “Drunk (And I Don’t Wanna Go Home).”

King co-wrote the song alongside Martin Johnson, who also produced the track. It was recorded in both Nashville and New York before the pandemic. Lambert and King first met backstage at one of King’s shows and became fast friends. The duo previously collaborated on “Fooled Around and Fell In Love” and were tourmates in 2019.

“Elle and I were on tour together for Roadside Bars and Pink Guitars and she and I became really good friends,” Miranda Lambert said. “And, she sent me this awesome song 2019 and asked me if I would sing on it. And, I heard it and of course loved it- Such an anthem. And then 2020 happened, so we’re finally getting this song out and we got to shoot a really fun video at the American Legion in Nashville and we got to have really big hair. So, we had a blast.”

The Platinum-selling artists brought their own unique vision to life with their music video.

Miranda Lambert and Elle King In Their Own Words

Prior to meeting Lambert, King was a fan of her and her music. “The true story of this song sums up our wild friendship,” King shared. “Miranda is someone I have looked up to as a songwriter, musician, performer, and human being for a long time. So our tumbleweed snowball story of getting to know each other is the ultimate real deal kinda thing.  Nobody revs me up, kicks my ass on stage, or treats me more like family than Miranda Lambert.  Our rowdy reputations proceed us, so who else could sing this song together besides us? Crawling out of such a crazy year, still full of so many unknowns, I ultimately couldn’t think of another person I’d rather come out singin’ and swingin’ with than the most badass chick I know. Miranda.”

“I think this fun song was born from our becoming friends over the last couple of years,” Miranda Lambert added. “We are new friends but it really feels like we are old friends and I felt like that immediately when I met her at one of her shows. Since then, we’ve toured together and sang on stage together, hung out and partied together, recorded together, and so much more. This song just feels like the natural transition to the after party.”

Related Itemselle kingMiranda Lambert
Staff
← Previous Story Gabby Barrett Interview On Winning Best New Female Artist At The 2021 ACM Awards and Performing Her No. 1 Single
Next Story → The Inspiration and Story Behind ‘Knowing You’ From Kenny Chesney