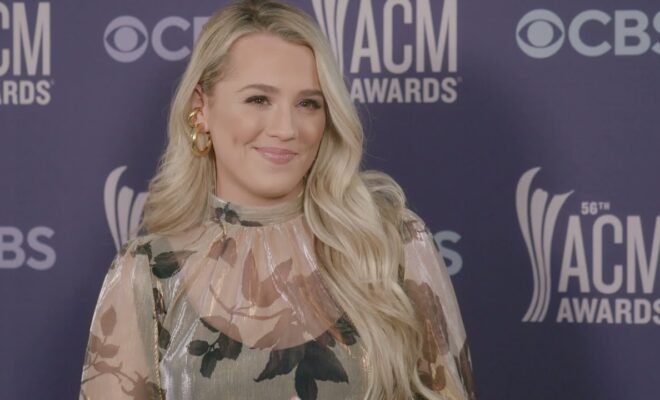 Gabby Barrett Interview On Winning Best New Female Artist At The 2021 ACM Awards and Performing Her No. 1 Single

Gabby Barrett is the 2021 ACMs New Female Artist of the Year!

Barrett accepted her award prior to the official telecast on Sunday, April 18. “It’s a huge huge honor,” she gushed. “Thank you so much to everybody that’s shown immense support towards me. I’ve only been in the Nashville community and world for about three to four years now and everybody’s just been so welcoming and so warm to me. I’m very thankful for [that]. It’s just a really exciting time for me and I just feel very honored and blessed.”

“This year has been a huge year for me,” she continued. “I mean so many things have changed me, becoming a mom me releasing my debut album Gold Mine over the summer. And two of the songs off of that album becoming my first two number one singles which I’m so blessed and fortunate to see. I’m just very excited and so I’m glad people are liking the music and gravitating towards it. It’s just been a very big year for me so excited to continue and keep working on new things.”

Gabby Barrett Live at the Bluebird

Gabby Barrett will be performing her single “The Good Ones” during the live show. “It’s a new configuration,” she revealed. “It’s exciting for me because I’ve never done anything like this. I think it’ll be really cool. It is kind of a piece of my song ‘The Good Ones’ which just went number one, which is my second number one so we’re excited to perform it.” Last year at the 2020 ACMs, Barrett performed her first No. 1 “I Hope.”

Barrett revealed that the music venue she will be performing at has personal meaning for her. “The Bluebird Cafe is such an iconic place,” she said. “I mean all three places are absolutely amazing but I’m really excited to be able to come back here. It’s my second time being in there and actually, the first time that I was in there was three years ago and the first time I was in there I got to meet Carrie Underwood. So now it’s like a full-circle kind of moment for me coming back and singing one of my own songs and being a part of the acms it’s just really exciting so i’m just excited for everybody to see it

Barrett plans to take in her fellow musicians’ performances. “Somebody that I’m particularly excited to see would probably be Chris Stapleton,” she shared. “I also love his song ‘Starting Over,’ so he always just blows me away with his vocals. Me and my husband are both excited to see him.”