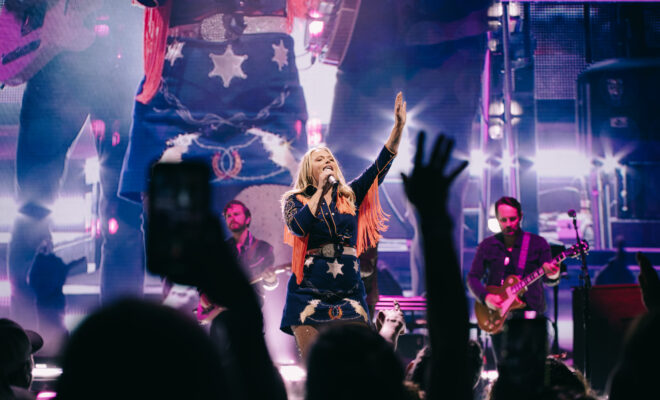 The Story Behind ‘Geraldene’ By Miranda Lambert

Miranda Lambert is giving fans a new version of “Geraldene.”

The country singer-songwriter released the second recording on her latest solo studio album, Palamino. The track was first introduced to fans alongside Jon Randall and Jack Ingram on their collaborative record, The Marfa Tapes.

“My favorite Geraldene is the one that we did on the hill in Marfa [Texas]. [There was] one take where I mess up and I fall off time. I like the raw, real one-take Marfa ‘Geraldene’ is probably my favorite,” Miranda Lambert said.

For Lambert and Randall, ZZ Top was their “huge influence” in creating the song.

“We wrote, we were writing to that vibe, even just with acoustic on a picnic blanket and Marfa,” she explained. “So the fact that we finally got their produced was like, full circle. In fact, that’s the song that Jon and Jack got in a fight about when we were writing.”

So Lambert decided to make a drink and a chicken sandwich for herself. After the break, she returned and set them straight.

“I came back, I’m like, ‘Are y’all done? We’re writing about a truckstop Queen, can’t be this hard.'”

“It was actually really funny. That moment I came back and I see him like this close each other’s face like really talking with their hands. I would look out the window and be like, five more minutes. Let them buck it out, and then we’ll go finish this song.

Miranda Lambert noted that they weren’t trying to chase Dolly Parton’s “Jolene,” because Parton nor the song could be beaten.

“But we want to ode to it because Geraldene wishes she was Jolene but she’s never gonna be that cute. And we knew that upfront,” she continued. “But then, but then there’s this whole, like, last verse where it’s like, ‘If I was a man, I’d make you my Dallas Alice because you’re hot. But back off. I’m the only bitch in the band.’ It’s really easy. I love it.”

← Previous Story Paul McCartney Electrifies California: CONCERT REVIEW
Next Story → Listen & Lyrics: ‘Will It Ever Feel The Same’ By Bazzi