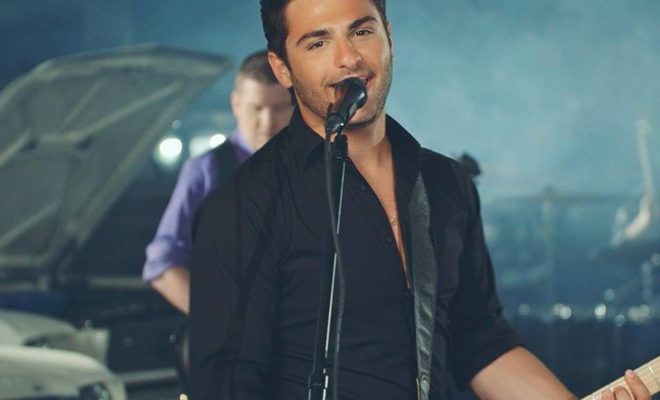 Has music always been a huge part of your life?

As long as I can remember, music has been a massive part of my life. It’s pretty funny actually, a little while back my parents pulled up a video of me when I was 2 or 3 just learning to talk and I was trying to sing. When I was 5 all I did was listen to Elvis Presley records, and that’s really how I learned to sing. I didn’t wanna be a cowboy or astronaut or whatever a normal 5 year old would want to be, I wanted to be Elvis.

At what age did you began playing instruments, singing, and song writing?

My parents caught on early that I had a thing for music so my aunt gave me an old keyboard and my parents started getting me piano lessons when I was 4 years old. After about 12 years of practicing 2-3 hours of classical piano a day and playing in all the competitions and festivals and stuff, I decided to pick up the guitar and teach myself how to play it. Even though I was playing so much classical stuff, Bach, Chopin, Etc. I never listened to that stuff when I wasn’t playing it. I was listening to Johnny Cash, AC/DC, The Allman Brothers, The Eagles, Ray Charles, Elton John and a lot of different music from all genres that my dad had playing throughout the house every day. I started singing live and writing songs in high school and since then I haven’t focused on anything else musically.

What are some musicians you look up to the most and/or aspire to be?

One that instantly comes to mind is Jake Owen. I call a little beach town in central Florida called Vero Beach home and Jake is from Vero and also went to FSU. When I came here as a freshman, I got a happy hour gig at Pots every Friday and then I got a band together so I didn’t have to be stuck to a barstool…. I wanted to perform, not just sing. Well Jake did exactly that when he was my age at FSU. We met a few years back at a VIP party at Pots. Since then, I have played with Jake multiple times at our “Home Bar” in Vero called the Riverside Café, which is pretty much my home away from home (my boat is docked in the back of the bar) and we have also played together at Pots. That being said, I have someone to look up to who has been in the same exact spot as me , someone who sat on the same little stage and had the balls to give his dream a shot….. and he made it. That in its self is inspiring. He also has given me some great advice and connected me with my current producer Eric Durrance who wrote 8 second ride with Jake back in the day. Eric has been an amazing mentor and has helped me immensely.

As for who I aspire to be, I think it really is important to just be myself. It’s not in my bones or genes or whatever to try to be someone else that I am not. I grew up on the beach surfing and fishing, I was raised on Classic Rock, Southern Rock, and Country, I love writing music and playing for people and that’s who I am. I don’t dig the idea of being someone else just because that’s what you think people want.

What are some of your favorite bands/artists to listen to?

Right now I am listening to a ton of Sturgill Simpson, Chris Stapleton, and Jason Isbell. I am actually going to Nashville to see Sturgill play at the Ryman soon and I haven’t been this excited for a show like this in a long time. They are all just really great songwriters and their songs just hit me in a really powerful way. And Chris Stapleton is pretty much the best singer in Country music right now, he is mindblowing.

Not too long ago you released your first music video to “Makin’ Moves” and “Movin’ On.” How was that experience for you? Would you consider yourself a natural in front of the camera?

The making of the video was way harder than I thought, but I loved every second of it. I had my band with me for a lot of it and they are all super fun great guys so that eased a lot of the stress. As for being a natural in front of the camera, I don’t know if that’s true or not but I can say that I wasn’t nervous at all. I just did what I normally do while playing and what I normally do just hanging out. Just tried to be me, that’s what I want people to see.

You just released your very first EP (which is beyond amazing), what was your favorite song to write, and why?

Thanks! I’m glad you dig it. My favorite song is definitely “Take Me Home”. I wrote that in class last semester. I love Tallahassee and all the craziness and partying and such but it can sometimes be exhausting. I was in class that day not paying attention and pulled my phone out and wrote the first line “close my eyes and push the gas, you’ve never seen a man move so fast, as me when I leave this class.” The song is written from the perspective of me sitting in class just day dreaming about going home. At the time I totally didn’t want to be in class or in Tallahassee for whatever reason, I just wanted to go home and fish or surf or just have a beer at the Riverside café. I play a lot of shows at home in Vero so when I go there I spend a lot of time by myself on my little boat fishing in the Indian River and going to the beach. Its one of the most peaceful places ever and a place that I really hate having to leave. My favorite part about that song is that everyone has had those times when they are homesick and want to just go home and be themselves without any craziness or stress….anyone can apply it to their life and I think that’s what’s great about it.

Were all the songs included in your EP written based on personal experiences?

Yup, they are all songs I write based upon events in my life, good and bad…. And maybe some I don’t remember, Little Black Dress was written when I was at Clydes and Costellos bar in Tallahassee after I had a little too much to drink. When I checked my notepad in my phone the next morning, I found the lyrics haha.

If you could tour with any artist dead or alive, who would it be and why? Speaking of, any talks about a tour in the near future?

I think I would really like to tour with Eric Church. His shows are just badass as hell and his fan base is one of the best out there. Being able to play for that group of people 2 or 3 nights a week would just be amazing. As of now I am not planning a tour but there is definitely going to be some in the future.

To conclude, if you could say anything to your fans, what would you say to them?

Well first off I would just thank them for being awesome and for believing in me and my music. I’d also thank them for inspiring me to be the best that I can be and to keep pushing forward. This industry is not an easy one to be successful in but having the support from great fans really, really, helps.

If you liked what you just saw/heard, you can purchase Kurt Stevens EP on iTunes by accessing the link below.

← Previous Story Interview: Cady Groves is funny and the world needs to know this
Next Story → EXCLUSIVE: Veridia Interview!