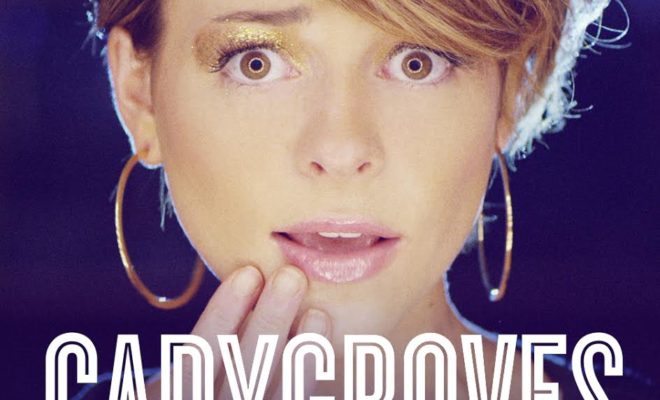 Interview: Cady Groves is funny and the world needs to know this

High school wasn’t really an experience for me. I kind of skipped a couple of grades and left as soon as I could because I was ready to go to college and didn’t really fit in. It was mostly just quiet and… I didn’t really know who I was yet. I don’t think anyone does but it was hard on me because I just didn’t understand anyone my age and I just wasn’t like any of them so I just wanted to go do my thing and it was better for me to live like that, I think.

Is it strange to be on your current tour playing high schools?

No because now I’m finally popular in high school. It took 10 years but today the cheerleaders asked me to be the top of the pyramid and I was like, “I finally made it.”

Did you get to the top of the pyramid?

No, but they did give me snacks.

What kind of advice would you give to those who are currently in high school with similar feelings?

That’s the thing, I felt like an underdog in high school so I really get kids who don’t really know where they fit so I get the struggle and they get that vibe from me that it’s ok to just be you.

Has there been a fun aspect to this tour?

This has actually been really fun, probably the funnest tour I’ve been on so far. The kids – to go in front of a high school and play is so different than playing a show that you have to promote and people from all over the city will come to because it’s such a different crowd; it’s so diverse that way. But a high school is like a fixed thing because it’s like a generational thing; you can say certain things to them, you know what they’re going to like, and they want to have a good time and they don’t want to be in class so they’re automatically going to love it.

I promote HearMeOut because I really like that one as a singer because it’s just something that you just record your voice. You can talk, you can answer questions. A minute is a long time to talk! You can sing a lot of a song in a minute and you don’t have your face on it. You can be basic, wearing sweats, and you can just sing and put something out there. I really like that one and then I’ve really gotten into Instagram this year so I’ve been trying to build that because really for a long time I was only Twitter so I wanted to branch out and focus on other ones. You just have to, social media is everything obviously.

We have to talk about the two main guys in your social media life, Drake Bell and John Stamos.

John Stamos and I have a long history together. Here’s the deal, he and I actually started talking like a year one time and he followed me on Twitter and then I think I grossed him out because then he was just like bye. And then I asked him to be in my music video I guess – I didn’t even know this – for my new single, “Dream”. It’s a roller skating rink video where it’s a roller skating party and they asked him to be in it with me and he just said, “I don’t skate.” That was it, a three word response. Ok, J. Stamos. I’ll remember that when you need me. When he needs me to play his daughter, I won’t be there… I’ll probably be there.

I had actually never heard of [Drake Bell] before this tour. I met him and had recognized him just from seeing him on TV before. He’s really nice, he’s really fun to tour with. He’s talented and just a cool guy. He’s a really great musician and the kids are just obsessed with him. He’s got such a crazy fan base and I just hope that one day I have that big of fan base. They put so much into him and I hope that I can achieve that one day.

We like to play this game called First and Last. So, first time you forgot your lyrics on stage?

Oh my god, my first show. I forget my lyrics every day. I don’t even know, I’m just struggling. Being a musician, you have to be human. Don’t mess up all the time because then you’re just basic, but if you mess something up just laugh because it’s funny. You’re having so much fun on stage. You’re going to trip sometimes. I mean, look at Harry Styles. He fell down on stage, who cares? It’s life so if you forget your lyrics every now and again it’s just like whatever.

It was probably the day I was playing the Ed Sheeran cover and I forgot the lyrics and I had to walk to the back of the stage and find them taped up somewhere. I was like, “I’m new, sorry guys.” But the crowd sang it for me so it was meant to be. I wanted you guys to sing this.

Alanis Morissette, Jagged Little Pill. I didn’t buy it because I was only 5 but my mom bought it and we had a 16-passenger van and she would let me sing the cuss words which is actually terrible parenting but whatever. Carol’s killing it. I remember she bought me a zebra cake and then we drove home from the Wal-Mart listening to Alanis Morissette and my life kind of came full circle at that moment.

Last time you were star-struck?

I used to love that show Awkward on MTV and Molly Tarlov who plays Sadie, the mean girl in it, I was so obsessed with her. Then we became real life friends because we live tweeted each other one night during Awkward and it was the best moment of my life. And then we actually hung out one day in LA and I just couldn’t believe I was hanging out with Sadie from Awkward. She ended up being one of my actual friends and now we stay in contact, she’s super super cool. But I totally fangirled over her before we were actually friends.

First person you called when you heard yourself on the radio?

I called my mom but I remember we were on a radio tour with just my guitarist and a rep from RCA so we got in the car and were driving to the next city and the hotel  and my song came on the pop station. I just freaked out and called my mom.

The last text that I sent was a picture of a pizza keychain to my friend Ed. It’s a necklace that fits an entire piece of pizza in it and it’s like a plastic bag so you can save your pizza and snack on it all day. And I was like, “We’re getting these.”