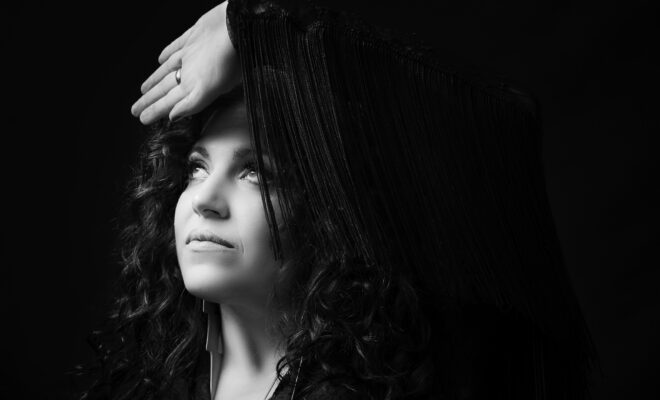 Hailing from New York, Eddy Lee Ryder has created a name for herself through her quirky and creative storytelling. With an 80’s-esque sound and vocals that sound like the love child of Janis Joplin and Stevie Nicks, Ryder has a magic to her music that is likely to take her songs to the top of the charts. Ryder’s new EP, Expected to Fly, was released in July and Stage Right Secrets was lucky enough to chat with her about the creation of the five-track masterpiece.

Having just moved to Texas, Ryder decided to take a road trip across the state with her friends. Unfortunately for her, she hadn’t realized that the car was running out of gas. While waiting for over eight hours for AAA to come to her aid, she and her friends met and befriended a man that seemed to live in an abandoned house. They pitched a tent in his front yard and after buying beers off of him, meeting his goat named Barbie the Asshole, and teaching him how to make smores, they played his guitar and wrote a majority of what turned into, Expected to Fly.

While the EP does not have a specific story-telling arc, each song was based on real experiences that Ryder has lived through. “Small Apartment” is about Ryder’s downstairs neighbor, Roberta, who would leave angry notes under her door almost every single day. “Vultures” reflects upon a toxic relationship, “There in Dreams” is about Ryder’s father who passed away when she was 16, “Silver Chain” is about the desire to live a wild and carefree life, and the title track, “Expected to Fly” is about coming to a crossroads where one will either sink or fly. The EP was heavily inspired by the “shimmering wall of sound” of the eighties. Ryder credits other artists such as Bruce Springsteen, early Tom Petty, and Fleetwood Mac for also providing inspiration for the tracks.

Ryder was classically trained in opera at Colorado College. However, she was never really fond of classical music. She wanted to use what she learned to become a rock singer. She recalls that in her “Beethoven to The Beatles” class – the class that got her really writing music – was extremely helpful because of one thing the professor said: “when you write a song, keep 80% of it very standard and typical to what anyone would expect, and then change 10-20% of it and make it very unique.” Ryder has used this advice to coin her own creative songs and infuse her personality into every single one.

As for her own advice to those that are aspiring musicians, Ryder says to avoid going online and comparing your work to that of others. She finds herself in writing holes where she can’t write for weeks because she has psyched herself out by looking at what others have created. “When writing,” she says, “make sure to ditch doing that for a couple of weeks.”

With the onset of COVID-19, Ryder began her quarantine with a breakup. This led her to dive into a deep writing hole which she says brought her some of her coolest songs ever. Once recording studios open back up, be sure to keep an eye out for these new songs, but until then you can find her newest EP, Expected to Fly on all streaming platforms. You can stream Expected to Fly, here.