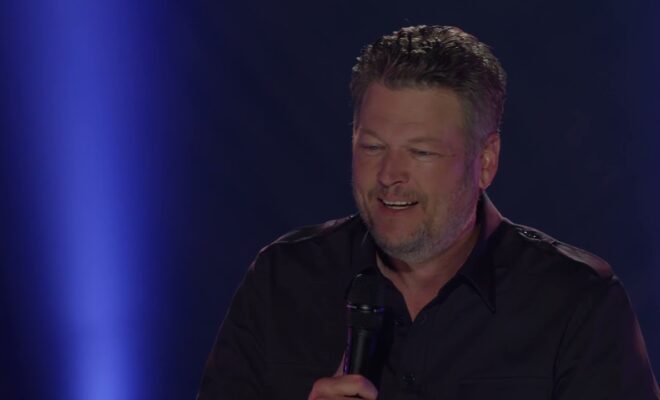 Blake Shelton brought down the house with “Austin” at the 2021 ACM Awards.

This year marks the 20th anniversary of “Austin.” The track was Blake Shelton’s first-ever No. 1. His ACMs performance also included a clip of his latest single, “Minimum Wage.” The performance took place at the Grand Ole Opry House. Shelton revealed that the ACMs team asked if he would like to perform the song for its anniversary.

“[It’s] shocking you know to wrap my head around that. It’s unbelievable that I’m still able to do this you know. So we’re going to perform “Austin” and honor the fact that it’s the 20th anniversary and then we’re throwing in a little bit of ‘Minimum Wage’ which is the current single that we have out right now. It’s gonna be exciting for me just ’cause there’s a lot of things that happened between that song and this song, it’s pretty crazy.”

Oddly enough, Shelton doesn’t often look back at his success and his beginnings. “It never happens for me with ‘Austin’ until I start the song. The way people respond to it’s like a reminder every night. ‘Oh yeah, that song is why I have a job.’  I always forget that. When they hear that intro and they know every single word of the song and they sing it as loud as they can, I think it just represents a time in people’s lives – that whatever they were doing in 2001 at my shows apparently whatever they were doing was good times because people have a blast when I start that song.”

Blake Shelton On Getting Back to Music

“We’re getting back to performing music and even though it’s baby steps we’re actually showing up there,” he explained. “And even though we’re having to kind of isolate and do these things in different places it’s going to feel like a real award show. It’s going to like a real concert and it’s not going to be this something that we’ve been having to do on Zoom and FaceTime and stuff over the past year because of the circumstances. We’re able to now at least get in the door and bring our bands and it’s going to be some damn good music.”