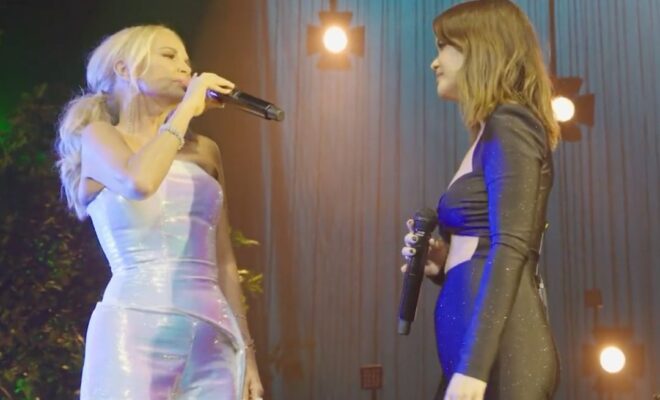 Maren Morris got to live out one of her dreams by performing a Wicked hit alongside Kristin Chenoweth.

On Friday (Dec. 2), the country hitmaker performed the final show of her Humble Quest tour at the Bridgestone Arena in Nashville. During the show, she brought out several special guests including Sheryl Crow, The Highwomen, and Brittney Spencer. But the one major surprise was the originator of the Glinda role in Wicked, Chenoweth.

“Sometimes we get to make our own heaven,” Morris captioned a video of their duet.

“There are some moments you’ll never forget,” Chenoweth wrote in an Instagram Story. “This is one of them. Gulp. I love you, @MarenMorris #ForGood #HumbleQuest.”

If you follow Maren Morris or Kristin Chenoweth on social media, you’d know that the “My Church” singer is a HUGE fan of Wicked. She actually auditioned for the Broadway musical with “The Wizard and I” through a self-tape.

The song was originally performed by Idina Menzel who originated the role of Elphaba, who Morris seemingly auditioned for.

On Aug. 11, Morris announced that she got a callback and was “in tears.”

“Prepping for this audition is harder than I thought,” she tweeted prior to getting the big news. “Elphaba hitting a full voice F5 but mostly being an alto the rest of act 1 is tough! What vocal warmups would work for this part?”

Morris added that she can belt but rarely does. The character of “Elphie” transitions from a falsetto to full voice in the same word during two songs (“No Good Deed” and “INTG”).

“It’s very technically skilled and I can do it, but the idea of 8X a week is daunting,” she concluded.

Fans were over the moon to learn of her callback in addition to being treated to hearing the duet with Chenoweth. Only time will tell if we will see her on a Broadway stage in the iconic green makeup.