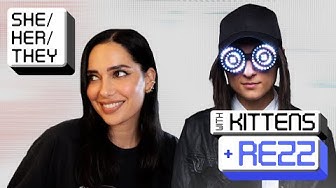 Early last year, we were telling you all about DJ/producer Lauren “KITTENS” Abedini’s new series, SHE/HER/THEY.

After a successful first run which included guests such as Demi Lovato, Hayley Kiyoko and Fifth Harmony alumni Lauren Jauregui, SHE/HER/THEY is back with a new season and a whole new roster of “people who have pushed boundaries and overcome obstacles just to be their true selves.”

For the first episode of the new season released today, KITTENS got to sit down with REZZ. The Canadian DJ opened up about her private struggle with anxiety, insomnia, and the effects of sleep deprivation around the Spiral tour, finding healthy love, identity, and advice for aspiring music producers.

Rezz is one of many who will sit down with KITTENS on SHE/HER/THEY to talk candidly about life, authenticity, gender, creativity, and more. According to the trailer Abedini posted on November 29, the list of guests for this season also includes Australian singer-songwriter G Flip and actor Jordan Gonzalez.

The first ten episodes of SHE/HER/THEY had gathered over 470,000 streams on Youtube alone, with episodes lasting between 20 minutes and an hour. To keep the conversation going, KITTENS has created a playlist featuring music from all her guests, as well as a Discord channel where listeners have gathered to discuss the episodes after each release.

← Previous Story Does Jenna Ortega Play The Cello? Find Out About The Wednesday Performances
Next Story → WATCH: Maren Morris and Kristin Chenoweth Duet ‘Wicked’ ‘For Good’