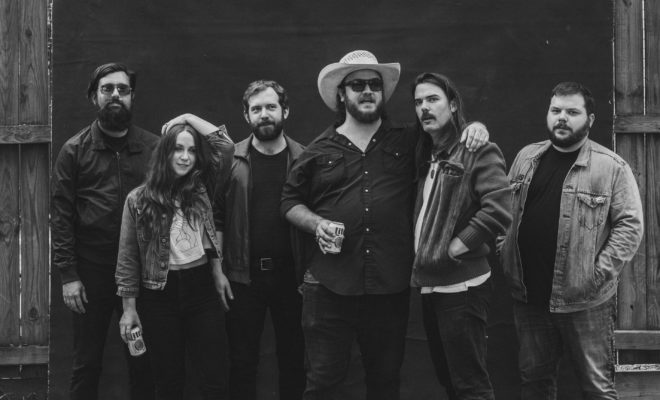 Vodi On Their Debut Album And New Christmas Single

Vodi is Tom Lynch, Haley Lynch, David Lascoe,  Austin Sepulvado, E. Marshall Graves, Tank Lisenbe, and Gus Alvarado. You’ve met, now get ready to fall in love! We got chat with Mr. Tom Lynch and it may or may not have completely made our day.

SRS: First off, why did you decide on the name Vodi for your band?

V: Well, my wife, my all and everything, my very breath, told me all the names I came up with sucked. So I made up a word based on the timeless method of randomness and “Vodi” is what I came up with. She liked it. We’re in love.

SRS: How did you guys form? And what roles does each person play in the band, besides instruments?

V: I convinced a friend of ours to let me and the drummer come record on the spot songs for fun. Then I met my now wife and thought, “I know what she’ll want to do, come sing on an album with a guy she’s never met before and has never heard sing.” Totally worked.

Hey Houston, come see us at @rockefellershouston for our double album release with @ellagoband on November 4th. @astragalband will open things up! Tix link in profile

SRS: Were you affected by hurricane Harvey?

V: It pretty much affected everyone in the area in some capacity, but as a band we were very fortunate.

SRS: We hear some 70s and 80s vibes in your sound. What are your influences?

SRS: So debut album “Talk” is out now. Love the album artwork! What do you hope listeners take away from the album?

V: I hope they like it, you know? And then share it. With anyone. Anywhere. Over dinner, in the car, on a rollercoaster, in the waiting room at the doctor’s office, at the meeting they were late to. I guess you could say I hope they take away “sharing is caring” from the album.

SRS: Can we expect some tour dates in support of the album?

V: Definitely. We love tours. Especially all the time we’re forced to spend together in a small, uncomfortable space. It really “weeds out the dumb dumbs” as they say. A plethora of tours awaits.

SRS: Christmas is just around the corner and you guys got quite a great song for the occasion. How did that come about?

V: Well our slave driver of a manager implied that we needed one. Turns out we love Christmas cause none of us buys each other presents, so we all save money. So we wrote the song. It’s a love song. About my wife. We’re in love.