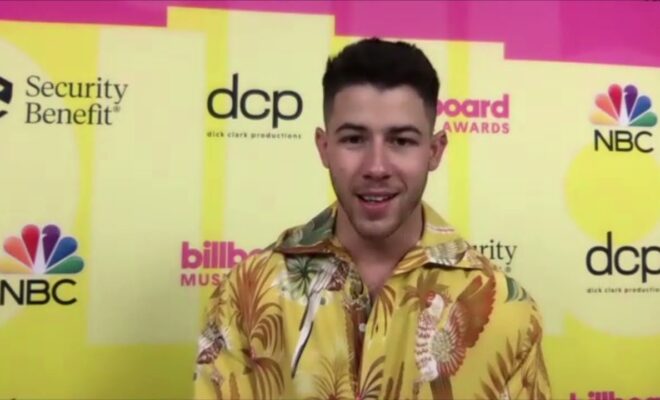 Prior to his new hosting duty, he ended up injuring himself and cracking a rib. He is currently on the mend but ready to fulfill his duties as host and perform alongside the Jonas Brothers.

“I’m doing just fine feel like I am healing at a a strange wolverine like pace at the moment. So I’m doing well, feeling energized a little bit of pain still but I’ll be just just fine,” he said. Their performance will still provide the same energy as a typical JB concert.

“Well luckily I leave the dancing professionals so the singing part I can handle,” he added. “And then at least the first you know couple days of the injury, I was sitting in my chair for The Voice. So I didn’t have to do too much, just hanging out watching some great performances.”

Nick Jonas is no stranger to hosting, as he recently hosted an episode of Saturday Night Live. He revealed that he doesn’t have too many jitters leading up to Sunday night.

“I think that this is a more familiar territory,” he admitted. “I’ve been on SNL a couple times with once with the brothers and one solo just to perform but never hosted. Whereas with this show I’ve kind of been around a bunch of times presented, been nominated, performed. It’s one of my favorite shows to to be an attendee and a performer at. So to get to come and host this time to be asked to host was a really an honor.”

Above all else, Jonas is ready to see his friends and fellow artists that he hasn’t seen in a year and a half.

“It kind of feels like life is getting a little bit back to normal and to kick that off with a celebration of a great year of music,” he said. “I am less nervous than I was for SNL that’s for sure.”

Jonas spoke about staying home this past year to flatten the COVID-19 cure. He is thankful for this opportunity to get some sort of normalcy.

“It feels like we are seeing the light at the end of the tunnel,” he continued. “I’m really grateful for that and for the opportunity to again see some familiar faces celebrate music. There is a real energy and buzz in the air which I think is is exciting. And to be the person that kind of gets to officiate the events of the evening is gonna be a lot of fun.”

This year, Pink will receive the Icon Award and Drake will take home the Artist of the Decade Award.

“I think it just speaks to this show as a whole and the legacy it has about being really artist-centric,” Jonas said of the honors. “It’s a celebration of the achievements of of artists and not only that year but but throughout their career. So someone like Drake for instance, who who rarely goes to a wardrobe as a whole, who loves this show and has come many times and is receiving this award just tells you something about what it means to us as artists. Obviously Pink, what an icon. I’m always nervous in her presence because she is so brilliant and one of the best vocalists of our time.”

After the BBMAs, Nick Jonas has a Jonas Brothers tour, Olympic special, movie, and The Voice finale to prepare for.

“I think I’m just gonna have to think of some more things to to be doing to stay busy,” he laughed. “We do have Jersey Boys coming up too so there’s that. There’s a lot happening but the the next six months. Getting my tour legs back under me, being with the brothers again, obviously some new music. When award season comes back up next year if I do my my job this time maybe I’ll get asked back!

His fellow The Voice coach Kelly Clarkson gave him some advice for hosting.

“I just saw her actually earlier today we’re doing some some pre-tape stuff for The Voice. She just said to have fun, be myself, and it’ll all go smooth. Which I think is the best advice one could give,” he concluded.