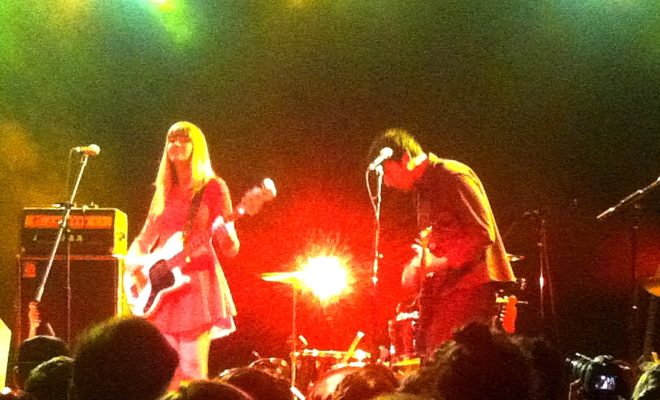 Last night I had the pleasure of attending the La Sera show at the El Rey Theatre in Los Angeles. La Sera has been on tour with artist King Tuff and they were just wrapping up their part of tour in their home town. La Sera is front woman Katy Goodman’s fine masterpiece and she has released three albums in the past couple years. A former Vivian Girl, Katy wrote her first two albums La Sera and Sees the Light about heart break while the tunes were smooth and had almost a haunting presence (in a good way!) but with the release of her latest album Hour of the Dawn Katy is done with slow tunes and ready to rock and roll.

When the curtains opened to reveal La Sera they played fast and loud and their fan base really got into it right away. What I love about Katy Goodman is that she’s a pretty red headed girl with a soft voice but once she’s into the music she head bangs and shreds like no other. A really great song to see live is Running Wild because the whole band really gets into it and it’s all about the music. I get tired of going to shows and seeing artists more focused on what they look like or interacting with the fans, which are all good things, but the music is the important part! La Sera kicks it into gear and puts everything they have into the instruments in their hands.
Check out this band if they’re in your area, they’re really fun to see live!