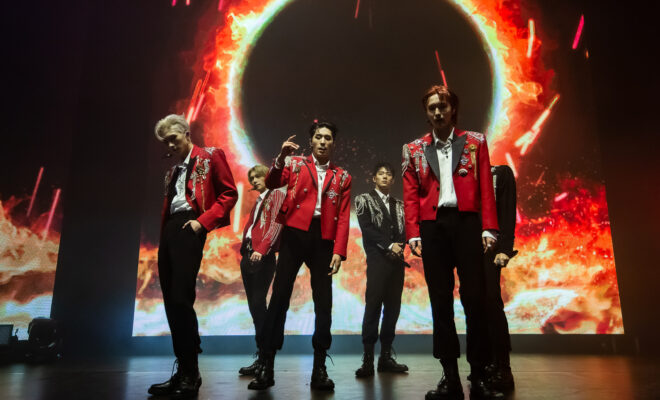 This past Sunday, K-Pop group P1Harmony brought the energy to the Paramount Theatre in Oakland, California. This is the group’s first time performing in Oakland and you could tell that the fans and the band were very excited for the night’s performance.

The show promptly started at 7:30 with no opening acts. The second the lights went down and the intro music started, the venue erupted with screaming fans. One of the items available at merch was a multi-colored light stick that the vast majority of fans had. The light stick had different color settings and the fans were waving them around all night. It was a beautiful sea of colors seen from the stage.

The show started off with a bang, full of energy and choreography and the Oakland P1Harmony fans were immediately mesmerized by what was happening. After the first few songs, the group took a few minutes to introduce themselves and talk to the fans, making some jokes and talking about how excited they were. One of the members, Keeho, had mentioned that he loves a song by Childish Gambino that mentions the city of Oakland and how excited he was to visit the city.

After the introductions, they slowed down the vibe a bit and it gave the fans a chance to conserve a little energy for the rest of the show. Following that, they got right back into their electric energy and the fans matched that energy with dancing and screaming along to every word. Throughout the night, the fans were waving their light sticks and illuminating the venue for the group to see all the fans’ happy faces. There were a few breaks between songs for the group to talk to the fans and about forty minutes into the set, there was an intermission where they showed a video for the fans to watch.

The video was the group’s “acting debut” as they later called it and it started out with game instructions on screen which then followed up with them in a room playing this game they invented. The game instructions were as followed,

The video proceeds to show each member playing the game and different things happen, like one member disappears and has to find a way back to the table with everyone and each card they pull gives them a different task.

After the video concluded and the intermission ended, Theo, Soul, and Keeho came out one after another to perform solos of their own songs and covers. Proceeding that was a cover of “Love Never Felt So Good” by Michael Jackson that Keeho, Jiung, and Soul performed together. Next up was a duo performance of Intak and Jongseob performing a rap song. After this, they continued on with their set and performed more of their songs as a group. Throughout the night they had a few outfit changes and into the second half of their set, they came out again to speak to the fans and talk about the video the fans watched during intermission and how they enjoyed performing some of their favorite American songs. At one point during the night as they were talking to fans they wanted to separate the fans by sides and see not only who could scream the loudest but they asked the fans to turn their light sticks to green and blue depending on what side of the venue they were on so that the group could see a each side lit up.

Overall, this P1Harmony show was packed with energy and a very excited group of Oakland fans who were most likely seeing the group for the first time. The fans were dancing and singing so much that you could feel the floor shaking and the group couldn’t stop smiling when they were seeing their fans having so much fun. They performed over 20 songs with a few intermissions to change outfits and to talk to the fans. For a seated venue, the fans really made the most of having the time of their lives and you could see on everyone’s faces how happy they were to be together in that space.