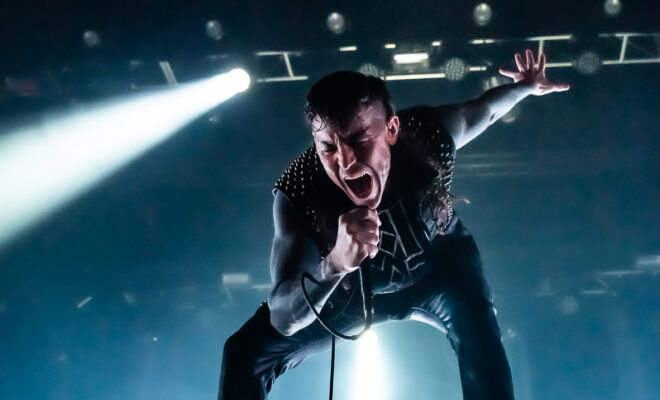 On November 23rd, AFI performed to a sold-out crowd at the Fox Theater in Oakland, California.

Some would consider this a hometown show for the band since they originated in Northern California and since Davey went to college in Berkeley, which is a town close by. They spent a lot of time early in their career performing at venues like 924 Gilman in Berkeley which is a small DIY venue that the band mentioned performing at during their set.

As always, the show was filled with energy from the crowd and the band and so many fans were excited to hear a great mix of new and old songs from the band. The band’s singer, Davey generally jumps into the crowd from time to time and will sing with fans as they hold him up. Aside from the intimacy of being one with the crowd, Davey tends to do a lot of high jumping mid-song, which fans love to capture on their phones.

AFI is promoting a new album called Bodies that came out last June. They debuted their new song ‘Caught’ at a few of their concert dates, including the Oakland show. Some other songs they performed included ‘Girls Not Grey,’ ‘Love Like Winter,’ ‘Miss Murder,’ ‘Silver and Cold,’ and newer songs, ‘Begging for Trouble,’ and ‘Escape from Los Angeles.’ Overall the show had a 17-song set list, the encore songs included ‘Third Season’ and ‘The Days of the Phoenix.’