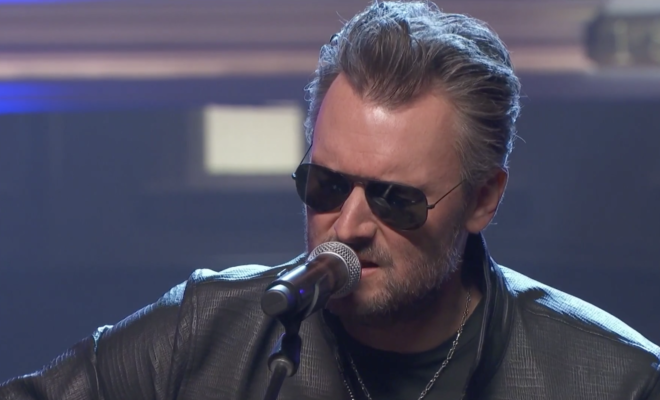 Eric Church On ‘Through My Ray-Bans’

The Chief performed during the Universal Music Nashville showcase on February 18. The performance took place at Nashville’s historic Ryman Auditorium. Church closed out the showcase with an acoustic performance of ‘Through My Ray-Bans.” Before he played the song he spoke about the inspiration behind the song’s creation. Church revealed that the Route 91 Harvest Festival fans were the inspiration behind the song. Church headlined the festival in 2017 when the tragic shooting took place.

“The festival in Vegas that… one of the darker periods that I’ve ever been through I don’t talk about it a lot,” he shared. “I don’t go there a lot mentally. This next song came from that and came from that place.”

Church revealed that he recorded this with just one performance. “We did it in one take and recorded this. It’s one of my favorite songs,” he concluded.

His Set and Upcoming Albums

Eric Church told the virtual crowd that “Heart on Fire” was the first song recorded for his upcoming three-record project, Heart & Soul. “I credit this song a whole lot with giving off the right energy to make the project the success I believe it will be,” he said.

The country-rocker then performed “Crazyland,” a song he wrote and recorded in just 24 hours. The song came from a dream where he visualized the characters and their storyline. He also performed his smash hit, “Hell of a View.”