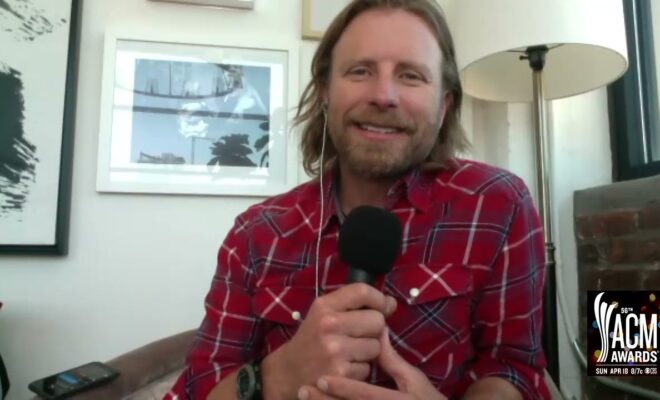 Dierks Bentley has created an all-star lineup of musicians for his ACM Awards performance.

Bentley will be performing at the 2021 ACMs on Sunday night. “I’m super excited about this performance at the ACM Awards,” he said. “We’re doing a U2 cover and I have an all-star band – just amazing musicians. Brittany Haas on fiddle, Megan and Rebecca Lovell on mandolin and dobro from Larkin Poe. And of course, The War and Treaty taking all the high notes. The amazing husband and wife that I met at the Seven Peaks festival – where they played a few years ago. So it’s just an amazing group with a huge mixture of sounds. The soulful sound of The War & Treaty, the bluegrass shredding of Larkin Poe and Brittany Haas.”

A Powerful Message and 2020 Lookback

“Of course War & Treaty being African American, and this song which mentions MLK and it’s just hopefully a powerful moment in the show and the right song for the right time here in country music with all that’s going on and all we’re trying to do to broaden our boundaries a little bit so I’m excited to have the opportunity to be part of that.”

“This is a special year for me being off the road,” Dierks Bentley continued. “I know it was difficult for so many people. I kept my band and crew on salary so I didn’t feel too bad about ditching them and going of to Colorado for a year and living out there. Just getting a chance really to be in a place that I’ve always wanted to be. It was exciting in that way, but yes – now that I’m out here in Nashville I can’t wait to get back on the road. I’ve been working on music all last year and this year and taking my time getting it right which is an added benefit as well of this COVID experience – just getting a chance to not rush the music and experiment a little bit.”

Male Artist of the Year Nomination

This year, Bentley is nominated for Male Artist of the Year. He lost the Video of the Year award to “Worldwide Beautiful” by Kane Brown. “It’s unbelievable,” Dierks Bentley said in regards to his nominations. “I’m so appreciative of the ACMs and everyone that’s voted for me and allowed me to hang in the game.”

“There’s so many great male vocalists out there – I listen to country radio just like all our fans do – I love country radio, I love listening to it and I have a lot of respect for a lot of singers out there. A lot of people, I’ll text friend after I hear them on the radio and be like ‘Dude, you’re such a good singer!’ Lee Brice, I just heard his song the other day, ‘One of Them Girls,’ what a vocalist he is. I feel super honored to be a part of this category. [I’m] appreciative of every award I’ve ever been nominated for.”