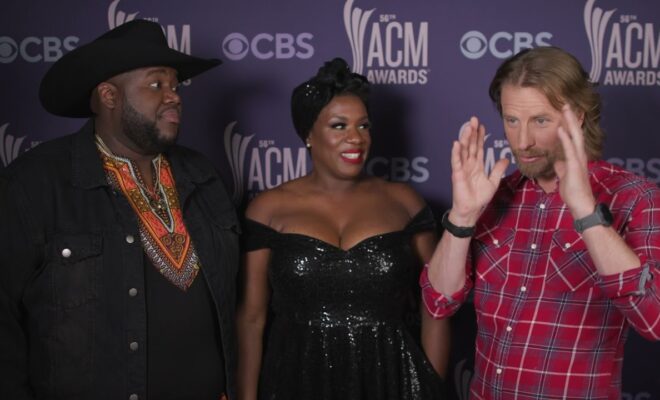 Dierks Bentley and The War and Treaty Cover U2 at 2021 ACM Awards: WATCH

Dierks Bentley and The War and Treaty took the ACM Awards by storm.

The trio performed at the 2021 ACM Awards on Sunday, April 18. The War and Treaty made history as the first Black husband-wife duo to perform at the ACMs. Larkin Poe members Megan and Rebecca Lovell will also performed on the mandolin and dobro. The musicians teamed up to perform at the Station Inn, known for its Bluegrass performances. The band performed a cover of U2’s “Pride (In The Name of Love).” With the country and Americana influences, the pop-rock song had a new life to it.

“I’m super excited about this performance at the ACM Awards,” Bentley said prior to the show. Bentley shared that he connected with the duo at his Seven Peaks Music Festival. “It’s just hopefully a powerful moment in the show and the right song for the right time here in country music with all that’s going on and all we’re trying to do to broaden our boundaries a little bit so I’m excited to have the opportunity to be part of that.”

“The song itself is incredible in itself is timely for right now,” the duo added. “To be on the stage with Dierks and the other musicians performing this song for this time, I think it will be an incredible moment.”

Bentley, Michael Trotter Jr., and Tanya Blount met in 2018. The three musicians were at the Country Music Hall of Fame to induct Dottie West.

In 2018, the husband-wife duo helped induct Dottie West into the Country Music Hall of Fame. “Dierks was there with Ricky Skaggs and we met backstage and connected,” they shared. The three kept in contact and were asked to perform at Bentley’s festival in 2019.  “Then the pandemic happened – we stayed in contact, checking in on each other.” The pair got the invitation to perform at the ACMs from Bentley via text message. “A few weeks ago, Dierks checked in again but this time asked ‘Do you want to do the ACMs with me?’ That’s just the kind of guy he is. A big powerful moment and he wanted to share it with us and we are grateful.”

The 2021 ACM Awards were held on Sunday, April 18 and hosted by Keith Urban and Mickey Guyton. The show took place at the Grand Ole Opry, Ryman Auditorium, and Bluebird Cafe.