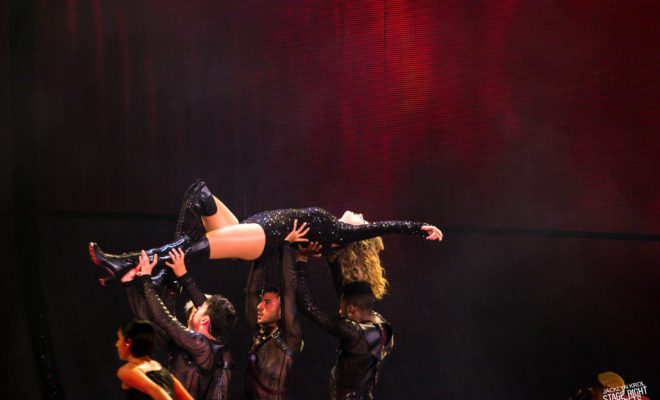 If you look closely during LWYMMD, you can see two snakes forming along the upper sections keeping with the tour’s theme.

If this wasn’t cute enough the little girl was reciting every lyric while eyes shut half asleep in her mother’s arms.

“Long Live” deserves all of the GRAMMYs and awards for it’s true icon status and this moment was absolutely breathtaking.

After singing “If a man talks shit then I owe him nothing” Taylor and her all female background vocalists paused and stared out into the crowd to thunderous screams.

At multiple points in the night Taylor spoke to the audience about lyrics, fans, reputations, and general life knowledge. It feels more like a best friend talking to you when you need a good therapy session.

Taylor has always been close to her fans, metaphorically speaking and physically. She went from her first auxiliary stage to the second by walking through a sea of fans giving them high fives and hugs.

Indianapolis was graced with an acoustic rendition from her Fearless album, “Forever and Always”.

When you sing about something, your production must include it. Taylor legitimately titled on a sub-stage.

Not only once did confetti fall to the ground (see what I did there?) but TWICE during “Shake It Off” and “This Is Why We Can’t Have Nice Things”.

What is usually an excuse to change costumes, Swift made this moments to stun her fans visually and lyrically reading somewhat of a poem.

13. The moment Taylor explained the thirteen significance in Indiana