Gathering Group along with Redmoon hosted the Snowstorm Music Festival, an interactive winter

wonderland filled with experiences to send you into sensory overload in the best way possible.

Both established and new artists took to two separate stages throughout the night, entertaining the

crowd with electronic dance music incorporated with various light shows. Other than the catchy beats,

here’s our top five moments of the evening: 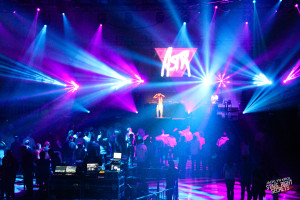 1. Photo Booth: Hidden near the Chill Out Stage but hard to miss, a giant green screen was set up

for showgoers to get their photos taken to commemorate the event. Four different backdrops

were used for the four-photo booth, which you received two photos strips and a sticker. Photo

booths are always a smash at events and this one was quick and efficient!

2. Dani Marie Makeup: Directly next to the photo booth was a sparkly young woman who could

make you sparkly too. Her work is unbelievable, and if you don’t believe us check out her

3. Flashtag: This photography company provided a similar photo booth but took it to the next

level. Any time a photo was taken on Twitter with the hashtag SnowstormFest, the picture was

way out. Everyone loved it!

4. Servers: Throughout the night, young woman in elegant white attire carried trays throughout

the event. While audience members were impressed with the trays filled with glow stick

necklaces and sunglasses, the best servers hands-down were the ones carrying cookies. Not just

5. Security: These trained professionals were incredibly kind and made the experience much more

pleasant. Shout out to our girl Cassandra!

You won’t want to miss next year’s festival, we promise!