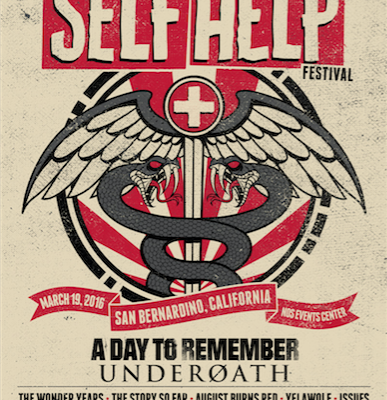 Self Help Is Taking Over Southern California in March

The 3rd annual Self Help Festival with make its highly anticipated return on March 19th, 2016 at the NOS Events Center in San Bernardino, CA. Today, the festival has just announced its full lineup which includes performances by headliners A Day to Remember and Underoath with support from The Wonder Years, The Story So Far, August Burns Red, Yelawolf, Issues, Crown the Empire, Further Seems Forever, Letlive. Thy Art is Murder, Tonight Alive, One OK Rock and Cruel Hand.

The festival was started by Floridian rock band A Day to Remember with Fly South Music Group, United Talent Agency, and Chain Reaction back in 2014 with shows in San Bernardino and Philadelphia. The festival has drawn in a huge fan following and has featured bands like Bring Me the Horizon, Of Mice and Men, and Memphis May Fire. This years boasts a great lineup so grab your hats and sunscreen and head over to the NOS Events Center on March 19th to enjoy some rock and roll under the SoCal sun!