Me Like Bees, Hayley Kiyoko, and Never Shout Never!

Saturday night at the Troubadour was packed with fans who were excited to see Never Shout Never, Hayley Kiyoko, and Me Like Bees.  By the time I got there the room was already packed for the sold out show and the fans were getting impatient for the music to start.

The first act of the night was from Me Like Bees who got the crowd ready for some music. Originally from Joplin, Missouri, the boys bring their simplistic style rock music to the stage with influences such as Modest Mouse, Arcade Fire, and the White Stripes.  Me Like Bees did throw out a cover of the Lorde song White Teeth Teen which everybody loved and sang along too.  But I think the best song of the night was their song Lazarus which really showed off the vocal style of lead singer Luke Sheafer as the spotlight hit him and he sang out into a quiet full house.  You can hear more of their music by going to their website melikebees.com and make sure to check out their page about healthcare! 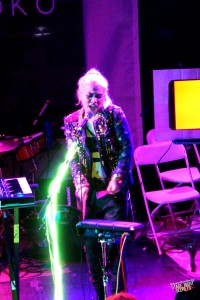 Then things got cool and dark.  The lights were down and there were light ropes wrapped around microphones and tables.  My favorite visual was the tv that had a screen that would flash colors throughout the act.  Hayley Kiyoko took the stage (in the coolest jacket by the way) and she was ready to hit some drum beats.  Other than being a musician, Hayley has been busy with acting appearing in shows like The Fosters, Scooby Doo, and Wizards of Waverly Place! Miss Kiyoko’s act was interesting as she used glow in the dark drumsticks to hit a drum pad while her partner in crime handled the bass. Hayley performed her songs Feeding a Fire and Girls Like Girls along with a cover of one of her favorite artists, Prince!  Her cover of Raspberry Beret was interesting and I was digging a different version of the classic.

Finally all the girls started screaming as Never Shout Never took the stage and the lights came up more.  The stage was set with lamps that really calmed down the glow in the dark vibe that Hayley set in her performance.  Over on the side of the stage was also a quartet of ladies who accompanied the band for a few songs.  The boys took their seats on their stools and started up their performance.  Making sure to play songs such as Piggy Bank, Love is Our Weapon, and a brand NEW song called Red Balloon, the audience couldn’t get enough.  One of my favorite parts of the night was the Johnny Bravo jokes that the band kept saying to each other all night.  While I’m not sure if most of the audience have seen the show, I was in the back cracking up at their impressions and the boys just kept making each other laugh.  Never Shout Never also threw a cover into their set performing Seven Nation Army by the White Stripes which got some of the older people at the show singing along.  The fans sang along to Magic and the boys decided to end their set with California, which was perfect for the Los Angeles crowd.  While the last image I saw was Chris Drew throwing his kazoo into the audience and girls trample each other for it, the audience had a great time for a show at the intimate Troubadour lounge.  Check out the photos below of the show!