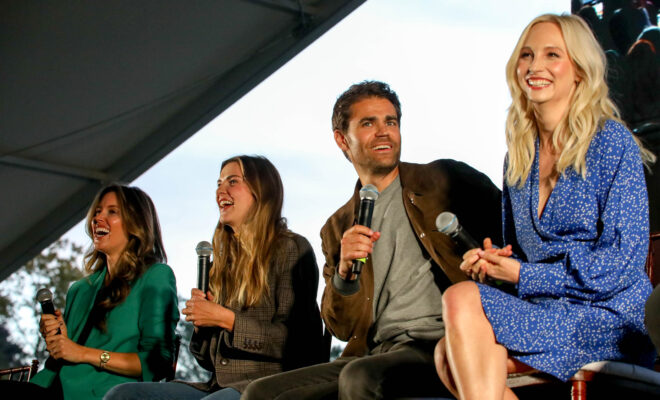 Is There a ‘The Vampire Diaries’ Spinoff In The Works?

Will there be a new The Vampire Diaries spinoff in the TVD universe?

Executive Producer Julie Plec spoke about the potential during a panel at I Was Feeling Epic convention on Saturday (Oct. 22). The event was held as a The Vampire Diaries reunion including cast from the original, The Originals, and Legacies in Covington, Georgia, a.k.a. Mystic Falls.

Watch a portion of her panel, below.

Julie Plec On A Potential The Vampire Diaries Spinoff

During the panel, Plec was asked what she meant when she previously stated that the show’s creators had another idea in the works after Legacies was canceled.

“I mean it’s only not over in that we did have plans for more,” she began. “I wouldn’t even call it a spin-off per se I can’t no I would I would big time.”

She continued, “I don’t know what I’m saying, but we never did anything. It was on our docket to get to maybe in the next year, but right now… I think we gotta sit and ride this wave of chaos out in the TV business.”

The famed executive producer explained that she doesn’t know with recent shifts in crew who is working for which network and who is releasing what shows on the air.

“I mean Vampire Diaries now is on Peacock and HBO Max but no longer on Netflix. The Originals I think is still on Netflix and are off maybe this year. Legacies is also Netflix. I’m over making shows for NBC so it’s a tough puzzle.”

“But we had a good idea,” she revealed. “Like we had a really good idea and I can’t tell you anything about it because it might never happen but Brett Matthews and Kevin [Williamson] and I have been talking about going sort of writing a show that could actually be set in Atlanta. Sort of city and then rural to warring factions. Maybe brothers… who knows?”