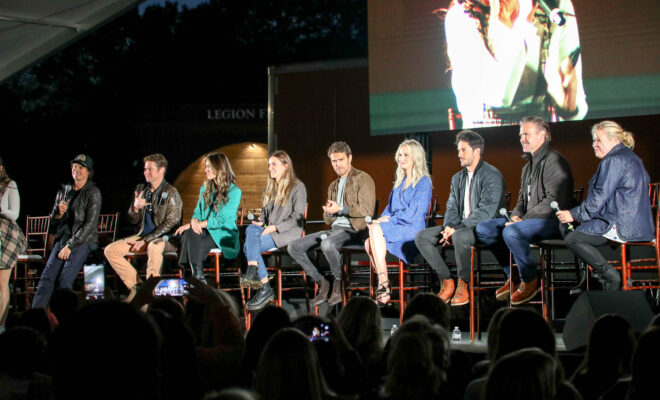 The majority of the main cast of The Vampire Diaries returned in Covington, GA (a.k.a Mystic Falls) for quite the reunion.

Hosted by Epic Events, the convention will return to the same town next year on April 14-16, 2023. During the weekend, fans even have the opportunity to attend events with their favorite stars including a karaoke night, masquerade ball, and axe throwing.

The cast revealed that Legion Field (where the convention took place) is the location that they held rehearsals while filming the series over a decade ago. They reminisced about the early days and how Roerig didn’t realize that he couldn’t do anything risky while filming, like snowboarding.

Another standout moment is when Plec spoke about this being King’s first professional acting role.

“So you’re casting a person who may not have ever really done this before,” Plec recalled. “And then we got to the Mystic Grill and she did the whole, ‘Why does nobody ever pick me?’ scene. We were all just sitting there like, it’s good she’s so good. Like, thank God!”

Could There Be a TVD Spinoff?

After the second spin-off of The Vampire Diaries, Legacies, ended this year, fans are wondering if there is anything else in the works. The answer is… sort of. During Plec’s solo panel, she revealed that she did have a concept for another series based on the TVD universe. She explained that the current state of television was a bit hectic and now wouldn’t be the best time to create it.