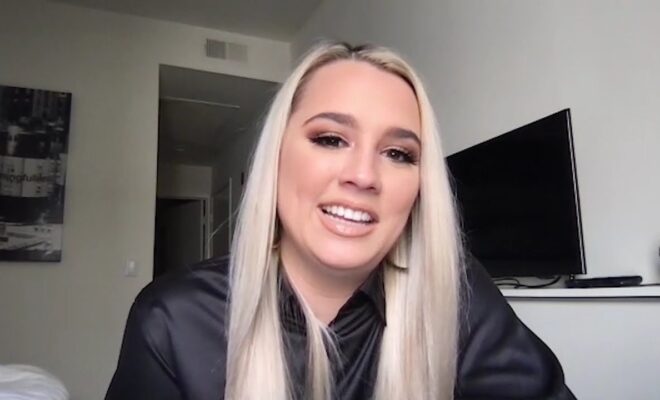 Barrett took home the Top Collaboration (Fan Voted) award for the “I Hope” remix with Charlie Puth. She also won for Top Country Song for the original version of the track. This year, she has nine nominations under her belt.

“I was really bad at math I’m not good with numbers,” she joked. “It’s definitely crazy I’m very excited.”

Gabby Barrett is still pinching herself being among such iconic artists like BTS, Cardi B, The Weeknd, Harry Styles, Chris Stapleton, among others.

“I feel like they got the wrong person,” she laughed. “I’m kind of like are you sure you put me in there with them? But it’s crazy… I’m just very shocked because those are all names that I grew up listening to. So to now be in categories with them is crazy. I just feel very humbled and very blessed.”

Gabby Barrett on Her First BBMAs

“Since I’m in country music it’s very involving the country community,” she explained.  “I’ve never been to something that’s like all-genre and everything in the music industry put together, which is awesome. I can’t wait to see what happens.”

Barrett has experienced quite the year, with the birth of her first child, two No. 1 hits, among countless career firsts.

“The past few years have been a roller coaster that I definitely wasn’t was not expecting,” she admitted. “I’d say the past three years, ever since writing ‘I Hope’ and then that being my first single that went number one. And then the pandemic hitting and me being pregnant and then my second single ‘The Good Ones’ went number one. And then all the different stuff in between all the different layers and the award shows. It’s just been crazy but in the best way and something that I wasn’t expecting so the Lord has just been very gracious to me.”

As for the pop crossover with Charlie Puth, Gabby Barrett can’t believe that so many people enjoy her music.

“I don’t think all of these huge stars hear my music,” she shared. “Because I just feel like it’s only my family at the end of the day that’s fans of my music. But now it’s spread to more of that which is awesome.  He heard the song and he had messaged me on Instagram and was just like, ‘Oh my gosh this song’s amazing.’ I haven’t heard [a song like] this in years.'” Puth asked to remix the track and the rest is history!