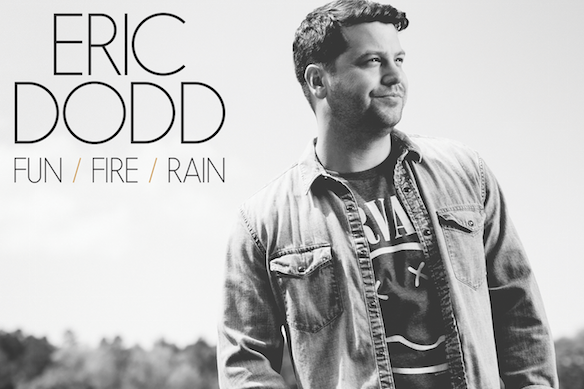 If you haven’t heard the name Eric Dodd you need to stop what you’re doing, go listen to his single “Outskirts,” and pre-order his new EP FUN / FIRE / RAIN.  Country music is the name of the game and the Georgia native isn’t afraid to write about his his trials and tribulations which allows his fans to connect with his music. The honest Dodd let us get to know him and we think everyone else also should.

1. How has being a native of Georgia shaped your sound and musical direction?

I grew up in Greensboro, Georgia, a small, rural town that is surrounded by beautiful Lake Oconee. I know growing up in Georgia has a lot to do with the evolution of my sound, and I still rely on my childhood/teenage/college experiences when I write. I went to school at the University of Georgia in Athens, and that’s where I really started honing my craft. Georgia has a rich musical history across genres, and that’s something us Georgians are proud of. I guess there’s something in the water and that gift keeps on giving. R.E.M. and Drive-By Truckers are a few of my influences that call Athens home. I remember going to see The Allman Brothers Band at the Lakewood Amphitheater in Atlanta. That show opened my eyes and ears to so much. I borrowed my brother’s Otis Redding and Outkast CD’s when I was 13 and still listen to those.  In addition, I had the opportunity to get to know Zac Brown and his band when I was first starting to perform. I learned a lot from those guys.

2. Being a singer/songwriter calls for always coming up with new content. How did you narrow down the six songs that made it onto your EP FUN / FIRE / RAIN?

That’s a great question. One of the real reasons I moved to Nashville was to become a better writer and grow my catalogue of songs. I am writing three to four songs a week and have had the opportunity to work with some great co-writers here in town. I am proud of my versatility and now have a wide range of songs to choose from. To be honest, it was kind of tough trying to find the right ones for this EP, but having lots of ammo is always a good thing. I truly believe these six songs show my versatility as a singer, songwriter and performer. I worked tirelessly with my producer, Jesse Triplett to narrow it down. Our objective was to introduce people to who I am as an individual and an artist. I hope they’ll connect.

3. What was your first reaction when finding out the music video for your single “Outskirts” debuted at #2 on the 12 Pack Countdown?

It’s really become more of a feeling of a dream coming true right before my eyes. I have to say my initial reaction was “we have to get it to number 1.” I guess that’s the competitive drive in me. It turns out, at this moment, my fans made that happen, and “Outskirts” is sitting at number 1. The CMT folks have believed in me since hearing the songs from FUN / FIRE / RAIN. It’s really refreshing to watch them go to bat for several independent artists that are grinding and deserve some recognition.

4. Your music video for “Outskirts” seems to capture you in what would be your everyday life.  What message do you want people to pick up from that video and song?

My vision for the “Outskirts” music video was to show people who I am and where I come from. It was fun to get my friends involved, too. This was the easiest video to shoot because we were literally hanging out and rocking out while the film was rolling. I am a pretty laid back guy that loves to work hard but loves to play hard too. I think my video producer, Jon King, captured that we are good people that love music and like to have a good time while blowing off some steam after the weekly grind. I hope the viewer feels that genuineness.

5, Do you feel a major difference now going back to Georgia and doing a hometown show versus when you were just starting out and playing smaller theaters. college bars, and country clubs?

I can absolutely feel the difference in playing shows in Georgia and the Southeast now versus a year or two ago. I have been performing in bars and clubs since I was 17 years old, and have been full-time in the music business since 2010. My Georgia and hometown fans have seen me go hard at this for a long time, and I know they are excited to see some great things start to happen. To go back home and see the crowds growing and everyone singing my songs is a humbling experience. At the end of the day, I am writing songs and performing for myself and my fans, and I know who they are.

6. What advice do you have for anyone trying to make it in the country music industry?

I advise any up and comer to start performing as soon as possible. It will hurt for a little while, but you have to grind it out and experience riding across state lines in a van with no A/C. Those are still some of the best memories. The country music business is getting back to the live show, and I can’t stress how important it is to really work on your chops and performance. I would advise anyone to manage their own careers and their band before thinking you need someone else to do it for you. I can say I managed and booked myself for many years before building my team. This offers perspective and understanding but also an appreciation for those woking around you. The more you do and know now, the higher the probability of having longevity in this ever changing business.

We can’t wait to see what the future has in store for Eric Dodd. Be sure to follow him on all socials media platforms while we all patiently wait for the release of his EP release which will be September 16th. Let us know what you think of his music!