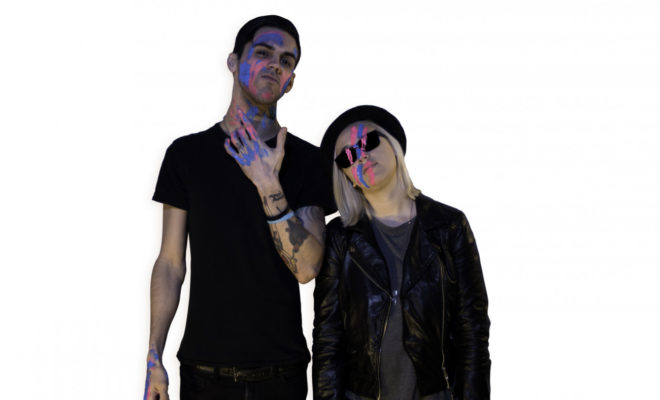 18th & Addison are an alternative/rock duo made up of Tom Kunzman (A Criminal Risk) and Kait DiBenedetto (Just Kait, What’s Eating Gilbert). The Toms River, NJ duo recently released their new album Makeshift Monster via their own label. Kunzman and DiBenedetto have a very unique sound, combining indie pop, punk, and melodic rock. 18th & Addison was originally formed in 2013 as an acoustic duo. We got to chat with Kait DiBenedetto about the new album, songwriting process, and touring! Check it out below.

Your second album with 18th & Addison, Makeshift Monster, recently came out. What was the recording process like?

“It was awesome. We are always very involved in the recording process. We’ve had these songs written for so long that when the time came to record them, we got super excited. We were in the studio all day, all night making sure they were exactly what we wanted. We wrote a lot of parts to the songs in the studio, just because we have had them for so long and wanted to make them a little bit better. It’s great being more hands on in the recording process, as well as in the songwriting process.”

Do you have a favorite track off the record?

“That’s so hard. It goes back and forth between a few. My favorite is “Moving Mountains,” the second song on the record. When you went on ITunes and were getting the pre-order, you could get the first two tracks on the album, so a lot of people got that track. It’s really high energy and fun. It’s a song that a lot of people jump around to when they hear it live.”

Was your vision for this album different than your previous release?

“It was definitely a whole different thing. When we went into recording our first EP, we wanted to make sure they were songs that represented our band well and really got our point across with what we were about. They were so high energy and aggressive. This album, we still wrote aggressively and exactly what we wanted. What was nice is since this is an album, not an EP, we were able to put songs on there that weren’t expected. The EP wasn’t as three dimensional. It stuck to one style. On the new record, we were all over the spectrum of styles. It’s good because it gives someone with a pop preference or a punk preference something to listen to.”

18th & Addison started as an acoustic project and developed into a full live band. How was that transition process?

“It was great. We would cover songs and started writing our own songs acoustically. What was so cool about the recording process was being able to plug in electric guitars, drums, and figure out bass lines. Bringing it to life for us was a little bit different than other bands where they do write all the songs electric maybe at a band practice or something and then bring them to life. For us, it was a totally different way of bringing the songs to life because we were writing them on acoustic guitars, so then it made the songs sound bigger and better than we thought they would. It’s been awesome to see how energetic the songs are live.”

Since you guys have very meaningful lyrics, what is your songwriting process like?

“In the beginning, we used to write more separately because I think we were still figuring eachother out as far as situations we were going through. Obviously everyone goes through different situations. We would write separately and then bring the songs to eachother and add something musically. Now, we have been writing together. He (Tom) will write a part about something he feels a certain way about and then he’ll write another verse and I’ll write the chorus. We are both very good at putting ourselves in eachother’s situations and being able to write that way and find something inspirational about the song lyrics. I think it helps that we are together all the time and dating. We have similar views on things and are there for eachother emotionally when things are going on. One of us is in the loop of the other one, which makes the songwriting process very easy.”

You have some tour dates coming up. Do you have anything special planned for these shows?

“We are playing a bunch of new songs. We plan on playing three or four new songs to give everyone a taste of what is coming for our band. Not that the EP songs are any less energetic than the new ones, but I think we are both so excited to get the new songs out there that we want to share more with everybody and give them something to look forward to on the album. That’s how you get people to listen to your music when you’re out there. They don’t know you half the time when you’re on tour, so you have to play music to bring them in and that’s kind of the music that we are really excited for people to hear. We are excited to be able to play more that one song.”

“We are going to tour a lot with this record. We are really proud of it. It’s a full length so it’s not like it’s a couple songs and then go back to the studio. We plan on playing this record for awhile. We started writing this record right when we were finished recording the last EP, so I know Tom and I have already started writing new songs for another record that is coming up in the future. I’m sure there will be a lot of songs that will be written. We are always very active on our social media sites, so we will try and keep in touch with everybody and try and build the band up even more than we already have. Playing is the most important part right now.”

← Previous Story Eric Dodd: FUN / FIRE / RAIN An Introduction
Next Story → The Next Chapter for The New Regime