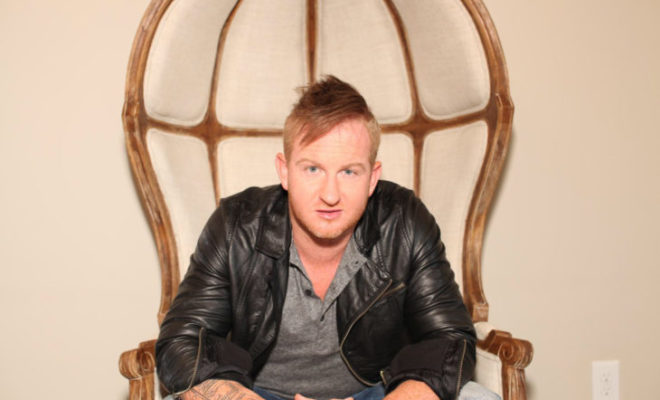 Country rocker, Stevie Monce, just recently put out his latest single, “Everything’s Better With A Buzz.” We got to chat with Stevie about his new music, radio tour, and what’s to come!

Angela: You released your latest single, “Everything’s Better with a Buzz,” a few weeks ago. What was the songwriting process like behind the track?

Stevie: “I wrote the song with Stephen Liles from Love and Theft, Jesse Rice, and Taylor Phillips. We finished one song and thought let’s do another one. We were writing in a studio on music row. A bunch of songwriters started getting done. They showed up at the studio out of the blue to join us. We were drinking a little bit and having some fun, so we thought let’s all write a song together. It was an accidental write that turned into exactly what the song is. It’s a party song.”

Angela: You also just released the music video for the single. Can you give us any behind the scenes info?

Stevie: “The video is insane. It is probably the craziest video released in a long time. I was sitting down with Chris Young having a drink when he asked me what the video for the song was going to be about and I didn’t know. He said “man, you are independent right now, so I would go as crazy as you can get.” For whatever reason, I just ran with it and it’s definitely weird and crazy. It’s one of those videos you can put on mute and it would be fun to watch.”

Angela: You recently signed a publishing deal. Tell us about that.

Stevie: “I signed with Mucho Love Music. It is headed by Shane Decker, who is a famous hit songwriter still active in the music industry. Honestly, they really believe in what i’m doing as an artist and a writer. The support that they are giving me is what really sold the deal. Having an entire team that really believes in what you’re doing is invaluable. Not to mention, it didn’t hurt that some of my buddies are over there. From day one, before I even signed, I was going to events that they were throwing. It’s always been like a family. When we started talking about a publishing deal, it just made sense.”

Angela: You have shared the stage with many amazing acts in country music. Who has been your favorite so far?

Stevie: “Love and Theft are my favorite, just because we are such close friends. It’s a lot of getting eachother on stage. Stephen will come up during my set and sing a song that we wrote together and then they will bring me up during their set. For me, it was the whole package of being on the road and being in a new city with your best friends.”

Angela: We see that you tour with Love and Theft a lot. Do you have any upcoming plans to tour with them again in the future?

Stevie: “We finished touring last fall. We had a huge New Year’s Eve show in Columbus, Ohio last year that we hope to do again. We are still talking about a fall tour. They just put out a new record and I just put out a single, so we are both at a busy point right now. If we can make it work, that’s something we would definitely try and put together.”

Angela: Since it’s festival season, if you could create your dream festival line-up, with you included, who would it be?

Stevie: “Eric Church would headline, then it would be Chris Stapleton. I would include NEEDTOBREATHE, they are one of my favorite bands ever. Of course Michael Ray, Love and Theft, and myself. I would put Cole Swindell on there, he’s a good buddy of mine. This is where it gets crazy… the absolute headliner would be Radiohead. It would be the weirdest festival ever, but it would be a lot of fun.”

Angela: You are currently on a radio tour. What have your favorite moments been so far?

Stevie: “On this leg of the tour, I have my dog, Brody with me. She tours with me a lot, but this tour I decided to bring a tent. My dog and I have been camping out and doing some writing. I made this a camping vacation radio tour, so that’s probably been my favorite part.”

Angela: What’s next for you?

Stevie: “We try and do over 200 shows a year. This year is going to be a little different because of the radio tour and studio time, but we are just going to hit the road. We are a very grassroots based band. We tour a lot and we really get the music out there by hitting the road. After this radio tour, we will be touring as much as we possibly can and getting this music out there old school style.”

Check out Stevie’s music video for “Everything’s Better With A Buzz” below!