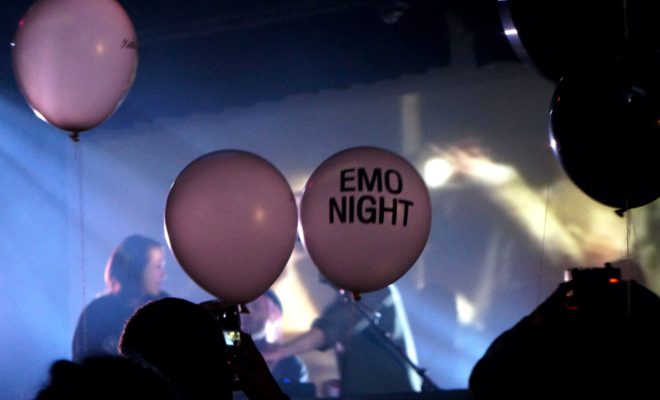 First of all, the year is 2005.  You put on your mix CD with “EMO MUSIC” written harshly on top of the disc with black permanent marker.  Squeeze on those skinny jeans that your mom said were too tight but who cares you look rad.  Slip on the converse that has pen markings from you and your friends scribbling doodles and song lyrics.  Your favorite band t-shirt was the perfect birthday present even though you made your grandma go to Hot Topic to get it.  Fingernails are already painted black (possibly with sharpie), and your arms are adorned with various brightly colored bracelets and sweatbands with skulls on them.  You burn the ends of your hair with a straighter to make sure it has that certain “pointed fringe” look and then douse yourself in hairspray.  There’s only one final step to complete the perfect look.  Eyeliner.  So. So. So much eyeliner.

As my emotional friends would agree, every morning starts out SAD AF.  Well okay not too sad on December 1st because although it is the first day of the last month of the year, it is also the one year anniversary of Emo Night LA.  Emo Night LA started off as some friends hanging out who liked a certain kind of music and would play that music at a bar called The Short Stop in Los Angeles, CA. Because of the popularity of this nostalgia filled dance crying get together, the three founders Morgan Freed, Babs Szabo, and T.J. Petracca have brought the theme to the Echoplex on the first Tuesday of the month this past year.  They call it, Taking Back Tuesday.

While the event is usually free or has a small entrance fee, the team decided that for the one year anniversary they would be selling actual tickets that sell out.  If you have been stressing out about getting tickets because you didn’t get them right away and then went online to buy tickets when they became available but you refreshed the page at the wrong precise second and tickets sold out in front of your eyes so fast that you started regretting life decisions, then you drove as fast as you could to the Echoplex and there’s already a huge line of people and you didn’t get a ticket…

Here’s our review of the night to let you know what happened!

If you had a ticket or if you didn’t have a ticket there were lines stretched down the block to get into the Echoplex Tuesday evening.  Though the show was sold out, you were allowed to wait in line outside of the venue and security would let people in as long as it’s not over capacity.  I’m not too sure how many people without tickets got in, the place was packed all night with emo kids!

Outside in the parking lot of the venue there were a few food trucks, photos, and a van to spray paint!  The van had already been covered with art, so it’s cool to see the transformation after a night for Taking Back Tuesday.  Once you get inside the Echoplex, there is a stage and a very large dance area for people to listen to Blink 182 and mosh to.  If you go to the back and up the stairs, it leads to The Echo which is the upstairs venue.  That area is smaller but has a great stage and a great view from anywhere in the bar.  With two stages and no set times, I was running like a chicken without a head up and down stairs just to make sure I could see as many people as I could!  That’s the whole experience, right?

The whole night was crowded, loud, and passionate as many DJ’s hit the stage and played some of emo’s best tracks.  The live performances of the night were Have Mercy, Fakers, Seahaven, and of course ending the live portion of the night with Dashboard Confessional.  Everyone except for maybe 20 people (who were upstairs) had packed themselves in for Dashboard to a point where people had to stand on stage!  Chris Carrabba killed it with an acoustic guitar as he was surrounded by fans who were yelling his lyrics right back at him.  The most emo thing I saw during his set though was not the fans on stage, the fans singing passionately in the crowd, or even Chris himself, it was a girl who was standing by a wall watching the performance and silently letting tears fall.  That’s real love there.

The DJ sets got insane especially when Jack Barakat (All Time Low) and Mikey Way (My Chemical Romance) teamed up to take their turn on stage and keep the party going.  But I would have to say the best DJ that night would have to be Mark Hoppus.  Not only did he play amazing songs that made me relive my youth, but he had a lot of new mixes to play that I’d never heard of, so it was more than just a playlist.  While most of the people in the audience had been jumping up and down all night singing, there were a few sights that I did not expect to see at an Emo Night.  The best moment was a guy in a Hanson shirt who was dancing near the front of the stage in The Echo.  The DJ saw his shirt and she decided to play a little Mmm Bop to mix things up.  To top off the cake, the Hanson shirt guy took this opportunity to grind and dance as dirty as he could to the 90’s teen hit.

The absolute best part about going to an Emo Night event is the people that are surrounding you.  Everyone has something in common, and that one thing happens to be the music we felt like was pouring out of our souls.  There were a lot of business individuals from the music industry in the audience who were easy to chat to, and even a few musicians were there to indulge in their inner emo and have fun.  Remember that Emo Night is every first Tuesday of the month in Los Angeles! Make sure to keep an eye out for Emo Nights in your city, because it is expanding.  Dig up your old band shirts, cry, sing, and meet new people to put in your top 8 all at Emo Night LA.