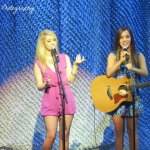 Getting the call that I, Jacklyn, the creator of a blog that’s only six months old, will be attending dress rehearsals for Macy’s Glamorama was surreal.  For the past 29 years, Macy’s Passport (now Glamorama) event has raised over 41 million dollars to help fight childhood illness, cancer, and HIV/AIDS.  With Glamorama in Minneapolis, Chicago, Los Angeles, and San Fransisco, there’s a whole lot of music, fashion, and giving going on!

The British Invasion themed event was held at the Harris Theatre in Millenium Park on August 17th and benefited Ronald McDonald House charities of Chicago land and Northwest Indiana.  Because the event included Bar III, Donna Karan, Jean Paul Gaultier, Material Girl, Sean John, and Tommy Hilfiger showing off the latest fashions and Karmin, Robin Thicke, and Megan and Liz performing their latest hits, there was no way this wasn’t going to be the coolest event of the summer!  And let me tell you…picking out my outfit for this event was no easy task.

Going inside the theatre and seeing all of the lights and the few rows of selected media made me realize how private and insane this really was. We watched the dress rehearsal that began with a video of a girl and her mother talking about the Ronald McDonald House and how it’s changed their lives. After seeing the impact the Ronald McDonald House has on families in need, I will be donating to them on a regular basis.

After the video, a countdown popped up and I gripped the arms of my seat.  When the countdown hit one, Megan and Liz, a popular new duo of singers, walked out on stage wearing dresses and heels from Macy’s.  They performed an acoustic version of their latest hit “Bad For Me.”  Once the girls walked off stage to a round of applause, the show continued with fashion from Tommy Hilfiger, Jean Paul Gaultier, and Material Girl.  During Material Girls’ run, the models broke out into full dance mode, complete with a head spin by B Girl Shorty, the spinning master.

I sat there trying to figure out how the show could top itself after that.  Then, Karmin came on stage and performed “Hello” and “Brokenhearted.”  Amy, lead vocals of the duo, blew my mind.  She is the most talented female rapper I’ve ever heard live, not to mention she can sing!

After Karmin’s set, we were escorted up to the green room (which was really white and black!) to interview the ever twinning Megan & Liz.  As soon as I walked in I said, “Hi I’m Jacklyn, you probably don’t remember me,” but then Megan said, “Of course we do!” and pulled me in for a hug.  Once I gave Liz a hug, she went to go hunt for an audio switch to turn off the music playing in the other room so I didn’t have to edit the audio.  Luckily she succeeded (thank goodness).  The interview, for a second time, was perfect.  We even did a catwalk at the end in honor of the fashion show.

I can honestly say it was like catching up with old friends; the girls even hung out with us and asked what was going on in our lives after the interview.   Even the employees at the theatre were saying how talented and nice the girls are.  No surprise there.  Megan & Liz are class acts and treat each person they come in contact with as if they are a friend.  I can’t wait to hear what’s in store for these girls in the future.  Be sure to check out their new music video “Bad For Me” and be sure to try their new Ring Pop!

And now that Stage Right Secrets has covered the Kardashian Kollection event and Macy’s Glamorama event we have officially taken our steps into the world of fashion, so look for any new posts about that as well!