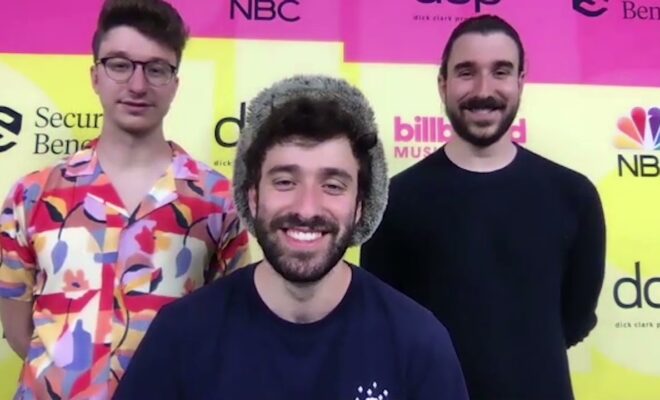 AJR are already winners at the Billboard Music Awards!

The trio’s first-ever performance was in front of three people. Their upcoming BBMA’s performance will have countless at-home viewers along with select in-person attendees.

“It’s the ultimate job that is true it was it was in a room that fit two thousand people,” AJR shared. “And we were expecting a lot of people to show up and truly only three people showed up and it was just one two three like that and it was this moment where we were like okay this is obviously where we have to start. So let’s treat every show no matter how many people are there like there’s a million people there. I think that sort of trained us well.”

“You’re gonna have basically a worldwide audience for your song,” they said. “It’s amazing! This is so cliche, but we truly never thought we’d be on an awards show or be nominated let alone you know playing live for people. It’s just it’s been such a long time coming. It’s been you know 15 or 16 years. So every little new victory is so mind-blowing to us.”

While the group is in awe of their success including their win, which was a shock to them, they’re just happy to play music again.

“It’s amazing especially in a year like the one we just had where we couldn’t get out in front of people and tour it’s amazing to see that it got nominated for awards at the Billboard Awards. Playing in front of people that’s the ultimate validation for us hearing them sing the songs back to us is just amazing,” they shared.

Although they knew how much they loved “Bang!” they didn’t realize how big it’s gotten until recently.

“Last week Will Smith did a remix and rap thing on Instagram. That’s exactly what we realized wait a sec, if Will smith knows the song and cares enough to actually post something on his Instagram about it then it’s as big as it can get,” AJR shared.

Aside from their Top Rock Song win, they are also nominated for Top Duo or Group and Top Rock Artist. They were shocked that they were up for categories with such legendary acts like BTS and AC/DC.

“I had to wipe away, I thought there was a smudge on my computer when I read that information. I was like really? We’re in with those guys?” they smiled. “I mean it’s unbelievable that they consider us to be even close to the size of those guys. All of them so successful and huge and they’ve been around forever. So we are so excited to just be in their presence.”