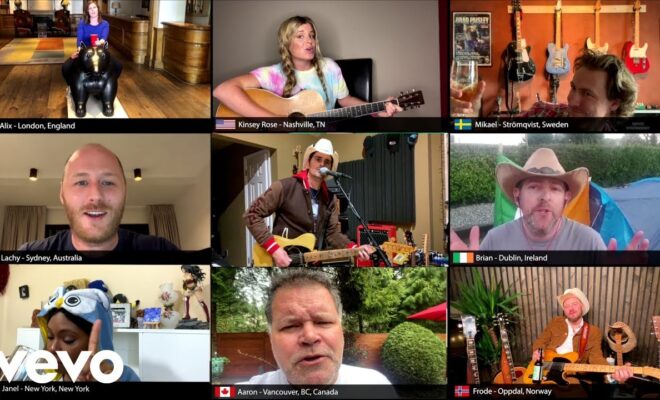 Watch Brad Paisley’s ‘No I In Beer’ Music Video

“I don’t know how to describe it other than, it’s amazing how many squares you can fit on a screen, as you can see right here,” he said of the video. “It’s a really weird thing to start to sift through all the footage I was going to use that I thought might be appropriate for this. I started to realize that most of the things that I’ve spent my time doing over the course of this pandemic kind of worked for the theme of the song. Everything from the Zooms that I’ve jumped into, to coloring my wife’s hair, which Darlene I’m available, to all of the stuff with my friends and collaborations. These virtual things we’re all doing, like what we’re doing right now, just kind of worked.”

“Then there was beer-sketball, the bouncing of the basketball with a beer challenge that we’ve been a part of. It all just kind of worked into this thing, he added. “The other thing was when I first rewrote this song to fit the times we’re in, one of the main changes had to be the opening line. The original opening line was, “there’s a bunch of people coming over,” and I knew that wasn’t the right sentiment.

“It becomes a much better song when it’s “wherever you are tonight, whatever you’re going through.” To have all these foreign countries, all these people everywhere from Ireland to Wuhan, China on this video who are literally in those locations, gives it so much more gravity.”