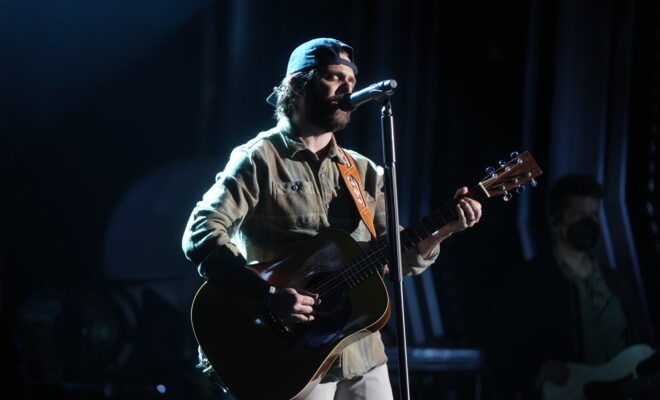 Thomas Rhett revealed that he will be “Country Again” at the 2021 CMA Awards.

The country superstar spoke about what his performance will be like. His friend Eric Church will be sitting front row at the awards show. And Thomas Rhett is ready to perform and hopefully get his seal of approval. During his single, he sings, “But last night we cracked some cold beers and cranked Eric Church to ten.” He plans on pointing him out and hopes to get a thumbs up from The Chief.

Rhett also spoke about being able to see his friends again and perform in an arena with fans in attendance. He plans to give his famous pals fist bumps and be in awe of other performances.

Thomas Rhett is only one of the twenty performers at this year’s CMAs. Veteran superstars Jason Aldean and Carrie Underwood,
Jimmie Allen, Gabby Barrett will all take the stage. Additionally, Dierks Bentley feat. BRELAND and HARDY, Brothers Osborne, Luke Bryan, and
Eric Church will as well. Plus Luke Combs along with Dan + Shay. Mickey Guyton, Brittney Spencer and Madeline Edwards are set to give an unforgettable performance. Jennifer Hudson, Miranda Lambert, Old Dominion will be taking the stage. Chris Young and Kane Brown will be doing their “famous” duet.  Finally, Carly Pearce, Ashley McBryde, Blake Shelton, Chris Stapleton, Keith Urban, and Zac Brown Band will also be performing.

Country Music’s Biggest Night is almost here. The big awards show will be hosted by none other than Luke Bryan. “The 55th Annual CMA Awards” will broadcast LIVE from Bridgestone Arena in Nashville Wednesday, Nov. 10 (8:00-11:00 PM/ET) on ABC.