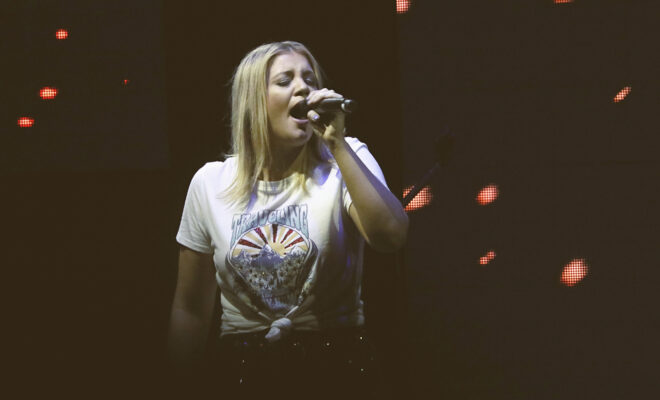 The Story Behind ‘Talking To God’ By Lauren Alaina

Lauren Alaina treated her fans with a masterpiece of a song entitled, “Talking To God.”

To celebrate a million followers on Instagram, the country singer released a never before released demo. Many fans believe that it should become a single because of the song’s relatability and emotion behind it. “Talking To God” quickly became a Lauren Alaina fan favorite song.

“I write so many songs that never make it on an album,” she began. “Because maybe we covered that topic with a different song or for whatever reason.”

She explained that she was trying to think of a “creative way to celebrate” the major milestone. It was then that she decided to take a look through her catalog.

“I was listening to that song and it just felt like the right song,” she shared. “Especially with the way the world is now and everything that’s happening. I just thought it could be a friendly reminder and it was just one of my favorites that I’ve written so I wanted to share it.”

The Inspiration Behind The Song

Lauren Alaina shared that the inspiration came from when her friend Busbee passed away. The famed producer worked with Alaina on her previous album, The Road Less Traveled.

“I remember going to David Garcia with the idea and talking about Busbee. I told him I’ve been through multiple things in the last couple of years. I lost my step-dad to cancer and then Busbee also had cancer, a brain tumor.”

Just after Busbee had passed, Alaina discovered something that really impacted her. She wondered why we wait to talk to God regularly until something tragic happens or we need something.

“I realized I had never prayed more in my whole life,” she continued. “It’s making me feel emotional knowing that we wait until we’re going through these things to talk to God. We talk to him so much in seasons of our lives that are difficult and I realized we should really talk to him that much all the time. I had written down, ‘Why do we wait until we’re going through hell to start talking to God,’ and that’s where the song came from and it was a really emotional day and the song means so much to me.”