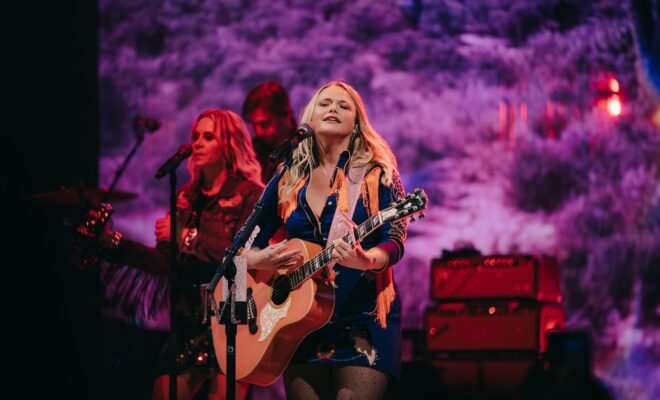 The Story Behind ‘Carousel’ By Miranda Lambert

The tune marks the final track on her eighth studio album, Palamino. She wrote the song alongside frequent collaborators, Luke Dick and Natalie Hemby.

“I think Carousel is bittersweet. I mean, there’s sweet stories in that one too,” she began. “Smith County is the county I grew up in, and Johnny Davis is a road out by where my farm is. We took some nuggets from our surroundings to make that song feel very real. Because parts of it are real for each of us. That was with Natalie and Luke. And I think it was one of the songs we’re writing. We were like, ‘Oh this is getting somewhere.’ Stuff’s happening. I’m feeling things.”

Miranda Lambert described the day that they created “Carousel” as truly living in the moment. At the time, they were getting lost in string lights and listening to crickets. They knew that they had magic and “this moment would never happen again.”

“And one day… when I’m in my Airstream somewhere at a KOA, half retired… you don’t retire from this business, as we know. So half-retired, I’ll be like hearing that song. And I’ll go straight [back] to that place.”

The country crooner believes that the song helped grant her “permission to move to the next phase.”

“It’s okay that the circus leaves town because it does at some point for everybody,” she added. “It’s such a metaphor for what we do, you know, it’s the same. There’s a part of the circus that lives in us, because of what we chose to do when we bring the party to town. And then we pack it up and we take it to another town and it’s very sad.”

Miranda Lambert explained that she would sometimes stay on the concert stage to see everyone depart. What was left was a sea of “empty beer bottles and the wind blowing piece of trash across the lawn and amphitheater.”

“Just like 20 minutes ago, we were all in here doing this huge party together and living this huge dream. And now the diesel’s running and we gotta go. Like it’s kind of sad and it’s kind of beautiful,” she continued. “When it becomes her at the end when she says I miss my Harland it’s like kills me. And even just being a writer on it, it still kills me. I know what’s gonna happen. We made it up, but it still just pieces my heart every time. It’s her. Like, if you write a song that makes your own self cry, I guess we did something right.“