The 1975 has blown up over the last two years. Their tours in the US have sold in within days, and some dates sell out within minutes. They hail from the UK and have taken the US by storm, bringing their brand of moody alternative rock in the ears of thousands of gals and guys. I was fortunate enough to find tickets last minute to their sold out show at Club Nokia in Los Angeles that were face value. Their shows always sell out and sometimes the tickets unfortunately are bought by scalpers and then resold for a ridiculous amount of money. I was ecstatic when I was able to nab tickets, and not just any tickets, but pit tickets *cue halo noise*. 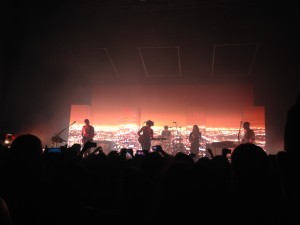 I have never been to a venue as big and fancy as Club Nokia in LA so I had no idea what to expect. The venue itself is very pretty and well laid out for shows that feel intimate, yet can accommodate more people than the smaller rock venues around Orange County. Normally, shows here are first come, first serve to get pit tickets but for this show the tickets purchased designated if you were allowed into the pit or not. The venue has multiple levels of seating with pit being pretty spacious and literally right in front of the stage.

I arrived late so I was not able to catch the opening act, but I was able to find my way into the show before The 1975 took the stage. There was a playback of a slow instrumental song that built up more as the time neared when they would perform. Minutes before they took the stage the song began to become faster and gradually got louder- it sounded similar to the many interludes featured on their self-titled album. I thought this was a great way to set up the tone for the crowd. You could feel a palpable energy in the air as fans grew more eager and the music accompanied this perfectly. This was the first time that a band has done this, as far as I have seen, and I think this really sets the atmosphere for the fans to get pumped for the set. 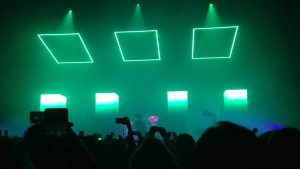 Finally, IT WAS TIME. The screams of the fans as the band took the stage was deafening and I could feel the energy in the room radiating. As Matty took the stage and the first notes of their new song ‘Love Me’ came on, the whole crowd was dancing along. Their set was a mixture of songs from their EPs, self-titled, and they even played a handful of new songs from their upcoming album. I really liked the setlist they picked as it highlighted all the best songs from their discography and they managed to show how versatile they are. The fans loved every minute of it and they played with such great energy. At one point, Matty told everyone in the crowd to put away their cellphones and that people were too busy documenting things for later when they should be living in the now and not missing out on what was presently happening. This set the mood for the rest of the show and you could see that all the fans were really trying to not pull out their phones as much and soak in every minute of the show instead of recording it. Matty also mentioned that the new album would have 17 songs and that they wanted to play smaller venues on this tour because it really connects them with the fans. He brought such charisma and passion and really showed that the band is extremely grateful that the fans are so supportive. Matty was dancing on the piano at one point and the crowd was with the band the entire time and the way they responded to the music was like they were mesmerized. 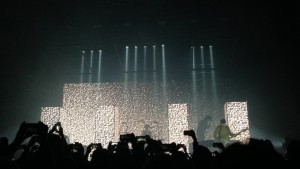 My personal favorite moment from the show was when they played ‘The City’ and the background lit up to resemble a city skyline. They had a really cool stage setup where the towers would change relating to the song and it changed color hues from a greenish gradient to all blue for ‘Robbers’ and pink for ‘Love Me.’ At one point the projections showed a static tv accompanied by their normal square box lighting above their heads.

The band brings such energy and passion into their music and this is something you’ll have to see for yourself live. Their production matched perfectly to their song and style and it was simply jaw-dropping. The 1975 will be back in April in LA and I highly recommend that you catch the show there or at any of the stops on the spring US tour. This show made me excited for what’s to come next for them, especially with new album dropping next year. I can’t imagine what the next show will be like! I will definitely be catching them live again and grab tickets soon before they are sold out again!