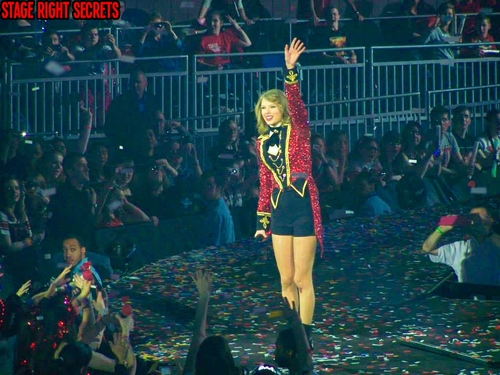 Taylor’s currently on tour for her latest album RED, and after touring the States for couple of weeks, the 22-year-old flew to London and sold out not 1 or 2 shows, but 5 shows at the 02, the second biggest arena in Europe, seating 20,000 people. You do the math and it’s 100,000 people from all over Europe who came out to London to attend either of her 5 shows on February 1st, 2nd, 4th, 10th, and 11th.

Every night was full of surprises, surprising guests, surprising songs, you can never know what T.Swift is going to come up with! First show, she surprised her fans with sensation Ed Sheeran, second night with UK singer Sam Smith, third night with Danny from The Script and fifth night with Ellie Goulding.  As for the fourth night, on February 10th, I’m about to tell you all about it!

Opening for Taylor in the UK was British pop rock band The Vamps. I’ve got to give it to the 4 guys, for a band that’s still quite new -they formed in early 2012 after finding each other on YouTube and got signed by Mercury in November that same year- they’re good! Fresh bands tend to struggle a bit at the beginning to find their own unique sound, but it seems like Connor, James, Tristan and Bradley found it quite quickly. The catchy-ness of their songs lead them to have their first single “Can We Dance” debut at #2 and their second single “Wild Heart” pick at #3 on the UK charts.

The band had a pretty short set, 6 songs in total. They started with “Wild Heart,” interacting with the crowd, introducing themselves and making people get up on their feet. They then went on with “Last Night” and “She Was,” some of the first songs they ever wrote together. The four guys shared their thoughts about their career so far and about the amazing support they got from Taylor, whom they’re big fans of, and from their growing fan base before performing “Mr Bright.” But it’s during their performance of “Can We Dance” that the band, and pretty much everybody else in the room had a bad scare. All hyped up, bassist Connor Ball misjudged the length of the stage and fell right into the gap between the edge of the stage and the security guards, guitar in hand. As professional as ever, the 17-year-old got back on stage right away to perform the band’s last song “Cecilia”. Connor was then immediately rushed to the emergency to get his arm checked up but luckily, ended up with no broken bones. The good news come just in time for the band’s big announcement: they’re heading on their first headlining tour in the UK!! After a 20-minute break, it was time for Taylor to come on stage as a big RED banner was lowered. I don’t think any of her songs need introduction anymore, as we pretty much all know why or who they were written for. She kicked off the show with “State Of Grace” and “Holy Ground,” which were enough to get the crowd up and dancing again. As humble as ever, she then gave the crowd her traditional ‘Hey I’m Taylor, thank you for coming’ speech, introduction she’s always given at the beginning of every show she’s ever done. At this moment, you could already see it in Taylor’s eyes that she couldn’t believe another 20,000 people from all over the world -you could spot among all the lights, a Brazilian flag and a French flag- came such a long way to see her live.

She then went on to perform “Red” before going back to older music with “You Belong With Me.” Just like for her previous Speak Now tour, Taylor had a full wardrobe of dresses ready, each more amazing as the other, with at least one for each song. She also surrounded herself with a few amazing dancers who helped her put on an amazing show, especially during the next song she performed, “The Lucky One.” Saying the crowd was loud would be an understatement, but it never gets too much for Taylor. “It doesn’t get overwhelming,” she told the crowd after a particularly loud round of applause after “Mean” and “22”. “It’s actually the kind of sound that you do want to hear as an artist.” After a little flashback to the first time she ever performed in London 7 years ago, Taylor performed her secret song of the night, which turned out to be “Fearless” on the second, smaller stage set at the opposite side of the arena, stage that she reached while walking through the crowd during the previous song. After making her way back to the main stage to perform “Sparks Fly,” it was time for Taylor to announce her very special guest performer: EMELI SANDE!

I was overjoyed since I absolutely adore Emeli and her album is just simply amazing. The ladies performed Emeli’s hit single “Next To Me” along with the crowd. After walking her guest backstage, Taylor came back in a fierce black outfit to perform “I Knew You Were Trouble” before slowly making her way to the piano, for a touching rendition of the song the recently performed at the Grammy’s, “All Too Well.” Her dancers then came back on stage, as Taylor turned into Juliet for her “Love Story” performance and into a barefoot ballerina for “Treacherous.” But as all good things have to come to an end, Taylor eventually performed her final song “We’re Never Ever Getting Back Together” under a shower of confetti before thanking her fans once again. Overall, the show was simply a beautiful reminder of where Taylor Swift belongs. In studios FOR her fans and on stage WITH her fans. Taylor is still to this day, one of the best live performers there is out there. She clearly knows what she wants to do, and how she wants to do it. She knows how to please, how to entertain and how to reach people while doing what she loves the most. So in you ever have a chance to see her live -even if you’re not a fan- take it! I promise you this is something you won’t regret.