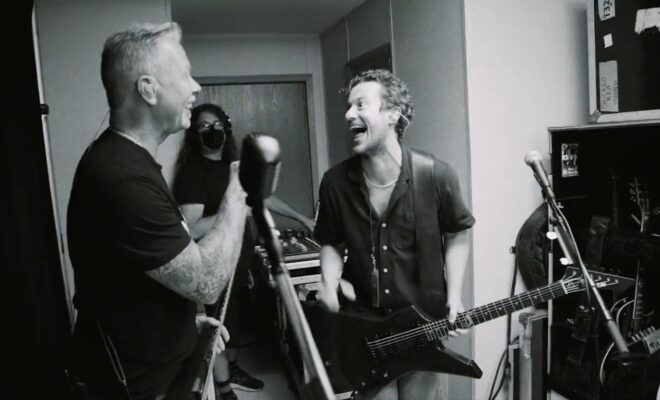 On Thursday (July 28) the legendary rock band headlined Lollapalooza in Chicago, Illinois. During their show, they used clips from Netflix’s Stranger Things when Eddie Munson performed their song “Master of Puppets.” In real life, Joseph Quinn is a huge fan of Metallica and actually played the strenuous guitar solo.

“Hello, I am backstage at Lollapalooza about to meet Metallica,” Joseph Quinn told the camera. We then see the beloved actor watching the band soundcheck and hanging out backstage, shredding alongside James Hetfield. Quinn is then seen bowing down to him, giving back his guitar.

The video then flashes to the exact moment that Quinn met the band. “Pleasure to meet you,” he is heard telling the rockers. Hetfield commented that Joseph Quinn is taller than what he looked like on television. Hetfield revealed that he has been a fan of Stranger Things since Season 1 when it debuted back in 2016. The show has actually been a bonding experience for him and his children.

“Thank you so much for letting us use the track,” Quinn added. “Thanks for doing it justice by the way. You definitely did,” Hetfield responded. Quinn had listened to the track over and over for two years to prepare for Eddie Munson’s big scene.

Metallica took Quinn to their practice room so that he could perform the guitar solo with the band live. After his impressive work, drummer Lars Ulrich said that Metallica would now be a five-piece with Quinn added to the lineup. The four surprised Quinn with his very own Ginsu Knife guitar, just like the one in the show. They even signed it for him.

Watch the epic moment, below.