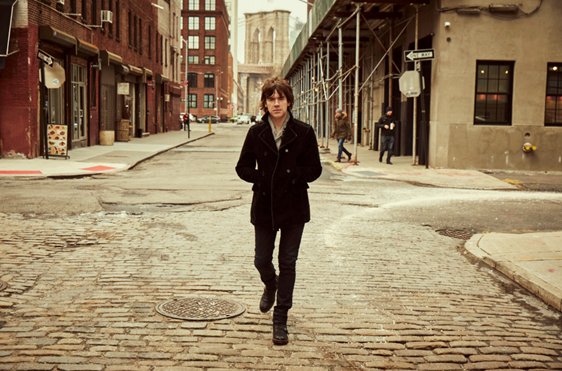 Coming straight from over the pond, Adam Masterson is one of the most promising young rock ‘n’ roll artists the UK has offered in the past couple of years. Masterson represents a timeless ideal of what a Rockstar should be for a new age by unabashedly embracing old school influences with heaps of spirit and soul.

Years after his debut album, the artist is back with a new EP Delayed Fuse which came out March 26th.

On Delayed Fuse, Adam reflects on a variety of elements to create his distinct sound, radiating what true rock ‘n’ roll is with his effusive charisma, dynamic range, and lyrical prowess. The EP features Masterson’s previously released singles “Avenue Walk,” which shows a softer and more vulnerable side of the rocker, and “Bad Luck Baby” which packs a punch with a rugged riff and down ‘n’ dirty groove and recently premiered on Billboard. Both tracks were accompanied by music videos produced by the artist’s wife, Anna Gabriel (Peter Gabriel’s daughter), amplifying their relationship from not only personal but professional as well as the couple combines their artistic visions to create content that will compliment Masterson’s music visually.

We talked with Masterson about his EP and his plans for the rest of 2020.

Your new EP Delayed Fuse has been out for a couple of weeks now! We loved it! How’s the response from your fans been so far?

It’s been great, thank you. Lots of people getting in touch on social media and online. It’s exciting

I tend to get the melody first then work on the lyrics. All the songs seem to be entities in themselves and the inspiration can be very different from song to song. I like to then see how the songs sit together and usually edit things down to which songs fit together.

Did you approach any obstacles during the creation such as running out of inspiration to create new art or anything like that? If so, how did you get back on track?

I was quite lucky songs kept cropping up and I kept writing while we were recording and sneaking them into the session. I wasn’t forcing this, it just felt like a very inspiring time.

One of the songs that was written while we were recording was “Farewell Blue Eyes.” James Hallawell and I were mixing “Crazy Rain” and took a break. I played James “Farewell Blue Eyes” which was a new one I had finished. He immediately put the mics up and joined in on the Hammond. We did another take and that’s what is on the record – we added drums, bass, guitars, mandolin and violin later and kept the vocal and Hammond from the original take when I was showing James the song. James knew we had it in our first few run throughs and didn’t need to track again with the band. That’s what I liked about working with James, he taught me there are no rules, you can do things whichever way round you want when working with great people. It may be part of the tracks charm and vibe that it happened so unconsciously.

How has your sound evolved since the release of your debut album, One Tale Too Many?

I recorded that when I was 21 years old so I’m proud of it as a document to me and my early writing. Much of it still stands up today particularly “Into Nowhere land.” That record was recorded live and very quickly as far as I remember. It’s quite a folk sounding record in many ways. I just feel my writing and my vocal style has deepened since then. Although I still track live in much the same way with vocals going down with drums and the band. I feel I’m much more involved in the production and getting the sound I want.

The videos for your first two singles from Delayed Fuse were produced by your wife, Anna. Tell us why it was important for you to include her in this new project?

Because I feel she has a good feel for what I want or can help me find what I want and she’s an excellent photographer and videographer who really cares about getting the video treatments right. I’m very lucky!

I’m planning some home online concerts and live sessions. Obviously the world’s in lockdown because of the virus so indoors navigating this with everyone else. I tracked three new songs in February so hoping to finish these when the restrictions are lifted and it’s safe then I’ll be ready to release full LP!