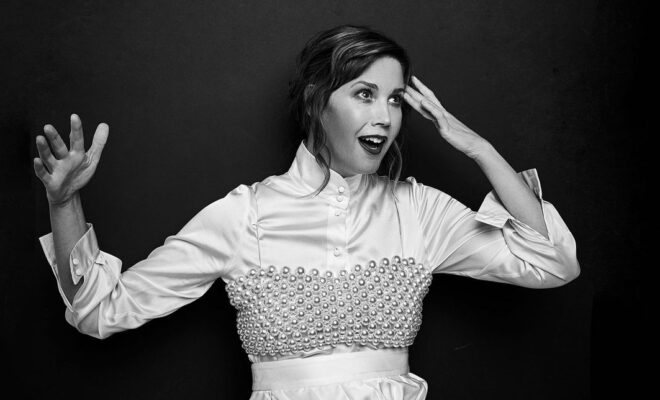 Our Exclusive Chat with Adria Tennor

You know her from Mad Men and The Artist, now Adria Tennor is the writer and star of the IGTV dark comedy series, Fetish. We got to talk to her on it all.

How did you pick the music included in Fetish?
We made Fetish on a shoestring budget. I didn’t want the fact that I didn’t have money to prevent me from continuing to make stuff. I think women (as well as all marginalized genders) have to just keep using the power of their voices to create material so we can balance the scales of gender discrepancy in media and show up for our daughters and girls so they can see themselves onscreen and know that they are just as important as men.

So, when it came to licensing music, I went to people I know, friends, mostly women, to see if they’d want to support a fellow female artist with a licensing agreement that stipulated profit sharing. Melora Hardin, Kassia Conway, and Sam Shelton are all pals who wanted to support me and my work and showcase their own in Fetish. Nina Baumer’s manager heard about my project and pitched her music to me, which I love. Kristen, my writing partner, was a fan of Pepe & the Bottle Blondes, so I reached out to him directly and he agreed to let us use Rhumba de 5 Kilos. We also collaborated with ex-British-rocker-turned-genius-composer, J. Peter Robinson, who gave us our score and tied all these pieces together with the help of Jamie Coupar, a masterful sound editor, mixer and designer. All of these musicians and sound artists are highlighted on our website: FetishSeries.com with links to their sites and streaming services so please follow and stream their stuff!

Freshly divorced, down-and-out, single, suburban mom, Paula Wheeler, suffers massive humiliation at an in-home shopping party, then finds herself in the trunk of her own car, a victim of her own kidnapping. Episodes 1 and 2 are streaming now on our IGTV channel so click our profile and IGTV to watch! #digitalseries #shortformat

What was your experience like working with Danny Aiello in the film One Moment?
Danny was a dream. He was incredibly kind and generous and present. When the shot was on me he would whisper, “You take your time, kid…this is your take. Don’t start until you’re ready. And do it as many times as you want. And go slow. I’m here. Just take your time…” I’m heartbroken he won’t be around to celebrate the finished film.

Do you have a favorite memory from your time on Mad Men?
Yes! The last episode I did on Mad Men was Jon Hamm’s directing debut. He was a prince. On the last day, the antique watch that the prop department had given me to wear popped off my arm while Jon was giving me some direction. We both bent down to pick it up and knocked heads, but he gallantly retrieved the dainty timepiece from the linoleum, and gently fastened it back onto my wrist, which I haven’t washed since!

When and why did you start writing your own material?
I got frustrated pretty early on in my career with how difficult it was to get acting work, especially for women. So, I started writing stand up which gave me the opportunity to get up onstage and perform pretty much any night of the week at an open mic. My material evolved into a one-woman show about being single in LA and finding pole dancing called StripSearch, inspired by my studies in striptease dancing with Sheila Kelley at her S Factor studio here in Los Angeles.

I find writing very therapeutic. The portrayal of the events and feelings that are the most scary, heartbreaking, and traumatic always get the biggest laughs and that somehow feels miraculously healing. I’m very conscious of languishing in the realms of self-indulgence, though, but my experience has been that the stuff that I think no one else will understand or relate to or care about is always the most universal, hilarious, and moving to an audience.

Do you have any preference for writing, acting, or directing?
I love acting. I started writing and directing to give myself more opportunities to act. But, I actually think I’m a better writer. And nothing beats performing/acting in my own material. I love directing too. Do I have to choose???

Is there a dream role you want to play or movie to direct?
Paula in Fetish is my dream role, although I’d like the chance to play her at, like, the end of Season 2, when she’s pushed through some of her terror about being a fetish fulfiller and gotten the hang of it a bit, and maybe even has a false sense of confidence and pride about fulfilling fetishes, which then back-fires, causing her to fall flat on her fur bikini – so-to-speak. I think that will be hilarious. In summary, I love playing dorky women who are persevering against the odds to rise up against their terror of the world, jerks, chickens, and fur bikinis.

As far as directing, there’s a script I wrote that won a bunch of awards, (including that CineStory fellowship) called Never Been Born about an aging stripper who returns home to care for her estranged, developmentally disabled mother and comes to terms with her disturbing childhood. I’ve come close to producing this material, but it’s been stalled. I know it will happen when the time is right.

What have you been reading, listening to, and watching during quarantine?
I’ve had a pretty tough couple of years, and at the beginning of quarantine a dear friend sent me a copy of Cheryl Strayed’s Tiny Beautiful Things, which really helps put life and strife into perspective. I also loved Phoebe Waller-Bridge’s one-woman show of Fleabag which she performed at the National Theatre in London (and streamed on Amazon Prime) and inspired her celebrated, Emmy-winning series. There’s an actress named Mary Neely who’s doing these incredible one-woman versions of Broadway musicals in quarantine in which she PLAYS ALL THE PARTS! Watch her! I can’t stop listening to Greg Dulli’s solo album Random Desire and everything by badass, sister-girlband, Larkin Poe. I want them to let me direct their next music video! There’s a country-pop singer, Emma White, who’s forging her way in that very male-dominated field who showed up on my radar in a very random way, but I take these synchronicities very seriously and believe in my bones that she’ll be at the CMA awards before we can all say “quarantine is over.” I have The Chicks Gaslighter album on repeat in my car because I identify with and find Natalie Maines’ musical redress inspiring and electrifying.

What is next for you?
I’m in the process of creating short companion video content for “Fetish”, some fun additional sneak peeks at the characters to further brand and promote the show. Also, inspired by Phoebe Waller-Bridge’s Fleabag, I’m writing a new solo show in tandem with a series, this time about dissolving a love affair with the help of a 12-foot pole. I’m also learning how to run casting sessions for myself at home over Zoom and edit self-tapes now that the television and film industry are slowly moving back into production but without in-person casting calls. I now have even more respect for Casting Directors! I’m also gearing up to promote One Moment and figuring out what publicizing an indie film in the time of COVID looks like. I’ll let you know what I find out!