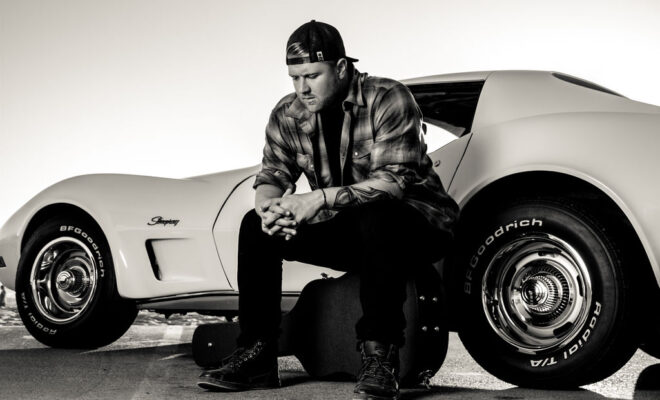 The video features a hometown party inside of a barn while Parr and his band perform live in concert. You’re sure to get this catchy tune stuck in your head for days to come. Fans can download and stream the single, HERE.

Watch the music video, below.

Congrats on your debut single! Walk us through the creative process behind the song.

This is one of those songs that wrote itself.  Like a lot of my songs, it’s based on personal experiences in my life.  Line dancing is something that’s been a part of my life for many years with extremely fond memories attached. My friends and I always go to a country bar as a place to hang out, let loose, grab some drinks, and do some dances – so why not write a song about it! The song was a collaboration with my guitar player, Ian Newbill and Chuck Sparks.

What drew you to the country music genre specifically?

Country music has been in my life since my earliest memory. My dad was a big influence on me and would take me to country music concerts before I could even walk, my first concert was Garth Brooks. I’ve been fortunate to go backstage and watch the musicians from the side stage and really get an insider look of artists performing. From that first concert, I fell in love with country music.

How involved were you in the creative process behind your music video?

I was very involved in the creative process of this music video because the song is very personal to me. The location is actually a barn at my friend’s ranch, that we often have line dancing nights, and have created life long memories with our friends. I wanted to share this with my fans, so they can have an insider look at a normal night that I get to experience with my friends. The producer, Peter Svensen, and the entire production team, made the entire process so much fun and special.

Since most of the world is or was in quarantine and stuck at home, has it helped or hurt you creatively?

It’s killing me!!  I love getting up on stage and performing live shows for my fans and I really really miss that.

And I found myself struggling for inspiration as I’m always inspired by getting out in the world and my personal experiences – I don’t want to keep writing songs about quarantine, lol.  I CAN NOT wait to get back on the stage and performing live so my fans can create memories with their family and friends at my shows. On the other hand, it has aided me because it gave me more time to create and focus on writing new songs (that I can’t wait to share with my fans!)

Fans can expect a lot more from us for the remainder of the year and even more next year! We have been working really hard on our new music and getting everything perfected and ready for release. I’m even MORE excited about hitting the road again and getting to interact with my fans at shows once restrictions are lifted!

Parr is currently in the studio working on his follow up single with producer Michael Lloyd. Lloyd has over 100 gold and platinum records under his belt and has worked with the Osmonds, Barry Manilow, Shaun Cassidy and many more. Fans can expect new single releases from Jake Parr before the end of 2020.

Growing up, Jake had a front-row seat to the world of country music, thanks to his father’s long-standing career in radio, television and the Academy of Country Music. His father, Shawn Parr, has been the voice of Country Music for over 30 years and is often referred to as the “Ambassador of Country Music.” Currently, Shawn Parr hosts the Nationally Syndicated “Shawn Parr’s Across the Country”, and for the past 6 years, Shawn could be heard on over 150 stations coast to coast on “Nash Nights Live.”

Jake Parr is a graduate of the Independent Artist Program at Music Institute of Hollywood. During his time at MI, Jakemet Chuck Sparks and Ian Newbill, the gentlemen who would end up being his producer/writer team, for the Jake Parr EP. Together, they assembled a band of ex-rockers, country-transplants living in Los Angeles, for the 2016 self-titled EP.