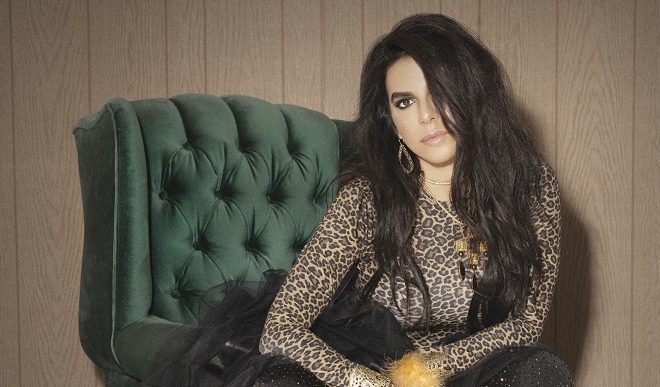 Our chat with Michelle Kash

Michelle Kash is climbing up the Billboard Dance Charts with her cover of Depeche Mode’s “Personal Jesus”. She plans on releasing a new original single and we got the chance to chat with her on it all.

Tell us about this retreat that made you realize music was your calling.
I would often go on spiritual and meditation retreats. I would bring a set of intentions or questions that I was seeking answers to. One of my questions was “what will I be doing with my life?” I felt kind of lost and without direction. Music was the furthest thing from my mind. During this meditation, I felt something in my throat. Like a coarseness or like when you would feel a ‘frog’ in your throat. I noticed it and moved on. That night I felt this urge to tone- just sing notes.. My voice sounded different. Like a rasp…it had a tone I had never heard. I didn’t think much of it. But day by day that urge was getting stronger and I started singing some of my favorite songs and recording them. I would play them back and not know whose voice it belonged to! It was pretty wild. I started rearranging songs, melodies, putting my old poetry to music. It was a complete change of identity for me and sometimes it was just a mindfuck. I remember this one time I was at home singing, and honestly, it was kind of an active meditation for me, and then suddenly I became so aware of it, and how different I sounded, and I just totally freaked out! But at the same time, it was natural, it kept calling me back. It really was like a “need”- like an urge to exercise, like an energy I never felt before. I was going out at night, alone, and I was meeting people and suddenly I was meeting tons of musicians and producers. I kept having these David Lynch surreal moments of synchronicity. It felt like I entered into another dimension… I started collaborating with people I just met, who knew me as a singer, while still keeping it from my family and friends. It was a wild time. My life completely changed from this one meditation. I found my voice. Maybe it was there all along and I just had to uncover it. I don’t know. But I am incredibly grateful.

You spend your childhood globetrotting. How did that shape you as a person and musician?
I am all about human connection…traveling and seeing other cultures, hearing other languages was exotic to me but also felt like home. No matter how different a culture could be I was always aware that we are all human. We can all relate to each other. For me that is what music is. It’s important for me as an artist to create a shared reality. That we are all in this together. When I have felt most alone I would listen to music and it would create a sense of connection. I think that’s amazing and a phenomenon. Especially now during this time… I have struggled with the daunting feeling that I could be alone in quarantine for quite some time. I have relied on music now to just feel connected to the human experience. Obviously connecting to friends and social media can help but I find it still can leave me empty. When I listen to music I feel a deeper sense of connection and fulfillment.

I know I grew up listening to my mom’s Depeche Mode CDs and vinyl records. How did your cover of “Personal Jesus” come about?
Honestly, it just kind of got in my head one day. I was singing it while going about my days and then I thought this would be great in the set. I reached out to Neil Rambaldi, we have been playing together for years, and I asked him what he thought for the guitar. He sent me back an arrangement and I remember it so clearly- I just played it in my kitchen on repeat while I was cooking or something. I wondered what would come out vocally and I started singing along. And what you hear on the track is what I was singing in my kitchen. I put it in the live set and I just felt so connected when I performed it. It really spoke to me and connected with the audience.

Do you plan on releasing more covers or original music, maybe both?
My next release is a new song called “Lions”, I’m super excited about it! It just feels like the natural next step after “Personal Jesus”. Can’t wait for people to hear it.

Once the world is back to normal again, would you consider touring or some live performances?
Yes definitely! I had a performance scheduled in LA at TigerHeat that I was so excited for that was just postponed. It was obviously the right thing to do. Everyone’s health and safety is the most important thing right now. I was working with dancers and I really felt like I was living out Dirty Dancing- which is a dream come true I think for most people lol. So I’m excited to perform it when we all safely come out of this time!

Who would be some of your dream collaborators?
Honestly, I have had “Stand Up” by Cynthia Erivo from the movie Harriet on REPEAT. It is so inspiring. I think listening to it just gives perspective on our entire situation. Harriet Tubman was a hero. What we are going through now doesn’t even compare to what she and other people went through at that time. So I literally have been LIVING with Cynthia Erivo and would love to collaborate with her.

You are extremely committed to philanthropy. What are some causes near and dear to your heart?
My biggest cause is to make animals’ lives better. I have always been an animal lover and I’m just grateful that I can make even a small difference in animals’ lives.

I recently transported dogs from India to be adopted, and I have donated supplies like operating lights and a generator to the Tibetan Charity Animal Clinic. They do such amazing work for the dogs in their community. I am a big supporter of Animal Haven in New York, and Animal Wellness Foundation in LA. And I am a supporter of Spirit Run Equine rescue for horses in Texas. And more!

How are you handling the COVID-19 and self-isolation?
I am ok. I am grateful to be in my home and I’m trying to keep to my routine. I think I have seen people kind of hit the ground running when this started, and honestly, I’m not like that. I feel everything and I have needed to process what’s going on in the world. Which I think for a bit, did mean panicking and anxiety and sleeplessness. That’s mostly settled now. I get up and I write. I meditate. I take care of and cuddle my dog. I move my body in some way. I cook, bake, nap, connect virtually with friends. I remind myself that this is all temporary and to take it one day at a time.