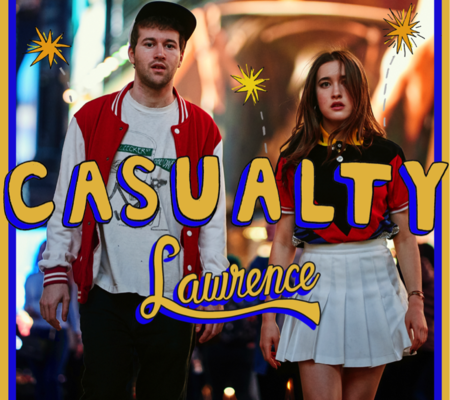 Your favorite new duo Lawrence released their new song “Casualty,” which was produced by Jon Bellion. Of the collaboration, Lawrence says, “Jon is not only one of our favorite artists, but he’s also a genuinely great guy, an amazing collaborator and a fellow New Yorker. We knew from the second he showed up to our first session in sweatpants that we were about to make some great music. I think with ‘Casualty,’ we’ve found a sound that still feels like Lawrence while injecting some of Jon’s authentic style that we’ve always been so inspired by.”

The group is currently on tour supporting Bellion’s run of North American dates this summer. The run of shows include stops at Los Angeles’ Greek Theatre, San Francisco’s The Masonic, Nashville’s Ascend Amphitheater and Philadelphia’s The Met as well as a performance at Firefly Music Festival tonight. Fans can purchase tickets at http://lawrencetheband.com/tour.
The band will perform songs off their acclaimed album, Living Room, which peaked at #2 on the iTunes R&B/Soul Chart last year.