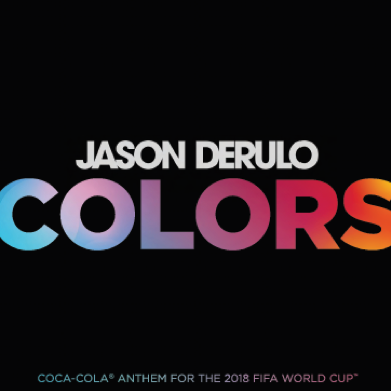 Global superstar Jason Derulo today released “Colors”. “Colors” is an inspiring anthem that unites fans and their favorite artists around the globe and serves as the Coca-Cola® song for the 2018 FIFA World Cup™ campaign.
Written by Derulo, “Colors” pulses with the excitement that greets the arrival of the world’s biggest soccer tournament.
Jason Derulo said, “It was a pleasure working with Coca-Cola to create the anthem for the 2018 FIFA World Cup™. It’s a tournament that celebrates athletic excellence and I’m honored to provide the soundtrack.” He added, “Through my years of travel, I’ve been able to see the beauty in our cultural differences and I wrote ‘Colors’ to celebrate that diversity and be a part of the amazing energy that sports fans around the world give to their teams.”
“We know the FIFA World Cup is a global cultural and social phenomenon. Every four years, people are drawn to this event from all over the world due to the excitement and platform it provides,” said Ricardo Fort, vice president of Global Sports Partnerships at The Coca-Cola Company. “We believe that music and soccer are intrinsically linked by the passions they evoke. We are excited to welcome Jason to the team and can’t wait to bring this upbeat anthem to the world ahead of the 2018 FIFA World Cup™.”
Related Itemsjason derulo
Jacklyn