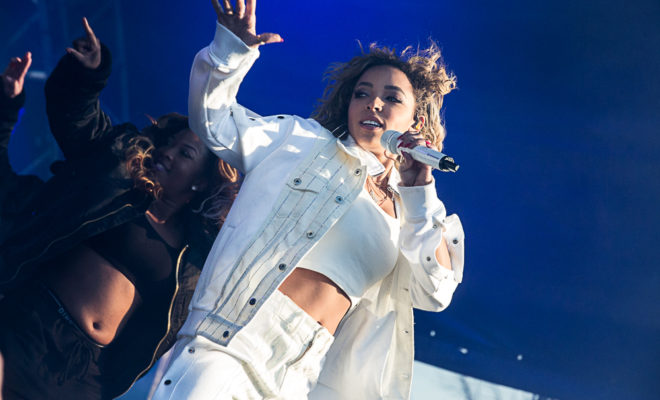 By: Shelby Chargin
Air+Style 2018 is reminiscent of the early days of Warped Tour. With skaters and boarders galore both competing and just honing their craft, in-between music sets, it was a day of fun and relaxation.

The music itself was a huge success. Unlike most festivals, Air+Style truly came out for women in the month of March with acts like Tinashe, Mija, and Phantogram stealing’s away the stages.

Lolophile kicked off the day with an incredible DJ set mid-afternoon as the young skaters zoomed around the exposition in their Kurt Cobain-esque clothing styles. It was a set of fun and color that set the tone of the day just right.

When Mija hit the stage, you saw the true hardcore stand of her music come out and as she bopped and danced along toner incredible beats and remixes, the crowd was the most tuned in they’d been all day.

But stealing the spotlight of the Summer Stage for everyone the entire evening was Tinashe. The breakout pop star reveled in her perfect balance of sexuality and talent and sang her heart out for all her adoring fans. Tinashe’s set and fan base seemed to be as exhilarated as the headliners of the evening.

Next up was Phantogram who easily had one of the best performances of the night. Performing as if this was going to be there last Show, the band left little to be desired. They kept themselves in lock and on check and had a massive crowd on their feet as they wrapped up with their hit single “You Don’t Get Me High Anymore.”

Gucci Mane and his Gucci gang came out in full force for the hip-hop lovers of the day. His set was definitely a highlight in the evening as it was pretty different than most on the bill. Although we still gotta give the summer stage crown to our Queen Tinashe, we will always be members of his Gucci gang.

Griz were easily the most interesting act of the night. With saxophone and live electric guitar blended with electronic dj EDM style music, it was an interesting and refreshing mix of modern and classic music that you don’t see often.
With constant political statements made in their background production aligning the hopes of the LGBTQ+ community, the Feminist Movement and BLM, Griz truly encompassed what it meant to be an ally on stage.

And as in mosr cases, nothing topped the headlining band, Phoenix’s performance. It was an all-encompassing heart pounding blood rush of a set that had fans and casual listeners alike on their feet. The French band who has been releasing music for almost two decades proved that years of experience truly do make a difference on the stage. There was no hestitstion and so much love in the venue, nothing else seemed to matter but their performance.

Ending the night with their colorful sounds and the lit up eyes of their fans, it would be safe to say Air+Style 2018 was a complete success.