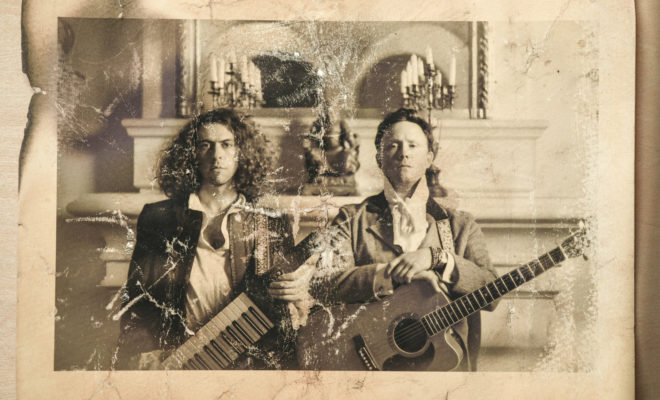 Ladies and gentlemen, it is without further ado, that we introduce you to the one and only: LAIKIPIA.

How did you two meet and come up with your band name?

Taylor was Xander’s birthday present. We were encouraged to collaborate by an ex of Xander’s (who, coincidentally, is related to Taylor). At first we were unsure, because at this point, both of us were making music on opposite ends of the spectrum. She persisted and finally managed to arrange a meeting on Xander’s birthday, where he was sent unknowingly by taxi to Taylor’s.

Neither of us expected it to work, but we soon realized we share a passion for creating worlds through sound. When we start with a song, we visualise what world it might exist in; it’s atmosphere, colors, landscapes, it’s flora and fauna etc. We endeavour to create music that can sonically transport people to our own universe, which we have called LAIKIPIA.

Tell us about your new single “Voodoo Woman”.

Love is beautiful, but it can also be dangerous – it can blind even the strongest of us, and lead us down the darkest of paths. Voodoo Woman is a cautionary tale about a man (a ‘lone wolf’) travelling through life carefree. Cocksure and confident, he believes he is indestructible, but then he finds his heart ensnared by a powerful and hungry dark spirit. ‘Beware the Voodoo Woman’.

How did it come about for you to create and produce the music video?

We have imaginations often greater than our means, and we’ve always had to get creative to figure out how to succeed in producing our elaborate ideas without real budgets. While we’ve had to be pretty enterprising along the way, we’re lucky in that we have some extraordinary friends with unique abilities, who enjoy collaborating with us and have helped us create our visuals.

With Voodoo Woman, our friend, director Mike Makara knew exactly what to do to bring the story to life. Brando Eaton is an awesome actor, and is also a close friend of ours who loved what we had been doing. Alina Shelestyuk is perfect in her part and was a badass on set – we were lucky to find her along with the whole talented team behind the scenes.

Like the process of all of our other music videos, we definitely had to get scrappy with this one too… Our entire crew got kicked out of a major set location because we didn’t have a permit, we had to create our own foot-strap rig using sandals and cinder blocks to keep the actors underwater without drowning them, we had to work with camera angles to cheat some effects, etc.

What can we expect from the video?

Voodoo Woman explores the aggressive end of our sound, and we convey our visuals in a similar light. We tell a relatable and immersive story that intends to bring our listeners to another world. While we go a bit darker in this one, it’s still very LAIKIPIA and maintains an element of spirited whimsicality.

Is there an EP or LP on the horizon?

We have a lot of new music in the pipeline that we’re very confident in – over time we’ve been honing in our sound and we’re excited to show the world what we’ve been exploring. We’ve also been working on new collaborations with some excellent artists. We’ve been constantly batting around the idea of releasing our debut album, but want to give each of our new songs the air we feel they deserve individually, so as not to lose them in the noise.

Do you have any influences fans might be surprised by?

Xander, what was your experience being a British army officer like? How did it hone you to be the artist you are?

I write about my experiences, and the army provided a lot of source material. I don’t sing about anything I don’t have a connection to, and my time in the Grenadiers gave unique insights and perspective into other worlds that acted as natural inspiration for songs. I have worked and lived alongside some of the strongest and most talented people I could imagine and have seen some of the darkest and most wonderful elements of human nature. The rhythms and musicality of many parts of life in the military have always resonated.

Do you have a 5 year plan or anything like that?

We’re going to continue exploring our sound and releasing music that’s real to us, while pushing the boundaries of live performance, production, and visual content… We’d tell you some of our ideas, but fear we’d sound like megalomaniacs.