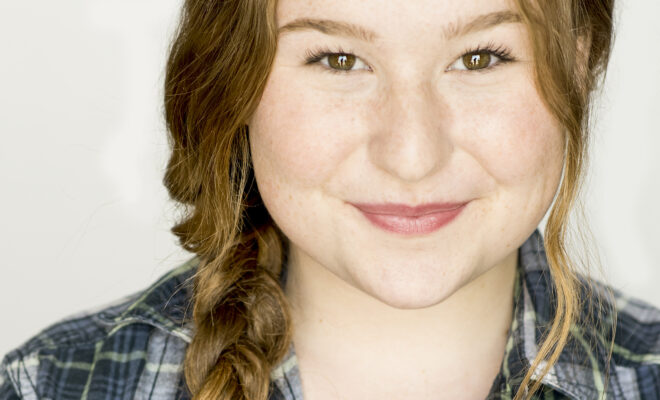 Julia Lester stole our hearts as Ashlyn, in the Disney+ hit show High School Musical: The Musical: The Series. We got the chance to chat all about season two!

Let’s just get this out there, I am a huge High School Musical fan. I know it’s on my bucket list to visit East High one day. What is it like filming there for High School Musical: The Musical: The Series?
JL: Oh, it’s surreal. It’s exactly what you see in the movies. Definitely lives up to its name. I remember my very first scene as Ashlyn ever was in the East High gym and that was just so cool and a really special way to start my time on the show.

Did you create any backstory for your character Ashlyn?
JL: There’s definitely sides of Ashlyn and character traits that I think of on my own, but they are things that aren’t portrayed in the show. Micro details that most storylines wouldn’t touch on. Like, what’s her favorite breakfast? Or, who’s she gonna hang out with on the weekend? Small details and things that are fun to come up with as an actor that makes Ashlyn feel like a real teenage girl with a life outside of what’s portrayed on the show. But the real meat of the character-shaping has been done by our amazing creator, Tim Federle, and I love being able to portray someone I haven’t entirely created. Someone I can mold from other people’s perspectives. It’s challenging and exciting and one of my favorite parts of being an actor.

Beauty and the Beast is one of my favorite musicals, so I am so excited to see it come to life in season 2 of HSMTMTS. I honestly am dreaming of Ricky or E.J. singing, “If I Can’t Love Her” to Nini. Can you tell us anything about the plot of the second season or anything about Ashlyn?
JL: Isn’t Beauty and the Beast so exciting!? Like, hearing what the “spring”/second season musical was going to be was our biggest question last year. We were all so excited to find out. I really don’t know much about the season! We’ve only read a couple of episodes, so not much plot has been given away just yet. But I will say that there’s SO much more music and dancing and that is really exciting and special for all of us!

You guys already started filming season two and had to take a hiatus due to the COVID-19 Pandemic. Do you know when you’re going back to film?
JL: No word just yet. We’re all still sitting tight with where we are. Hopefully soon though!

Hopefully, there is a season three of HSMTMTS and beyond. What are some musicals you’d love to do? (I personally am rooting for Guys and Dolls, along with Camp Rock)
JL: YES! This is, like, one of my favorite questions to get. It feels like real high school when we all try and guess what the show is gonna be! Guys and Dolls would-be killer, oh my god. Ashlyn as Adelaide, PLEASE! I said last year (before we knew it was Beauty and the Beast) that Into the Woods could be super fun. There’s just so much you could do with that one. Also the cast of HSMTMTS singing Sondheim would be….a dream.

The cast seems ridiculously close. How do you manage to stay friends while being co-workers?
JL: I am very very grateful to work with such wonderful people. We really make an effort to stay close and I think that’s what makes us such great friends. We really carved out a lot of time during filming to hang out and stay connected outside of work, and really build our relationship as people and friends before coworkers. But also we are very lucky everyone is extremely professional and eager to work, so that always makes the environment super positive and fun.

What has your experience been working with season two new cast members Derek Hough and Olivia Rose Keegan?
JL: Like I mentioned before, we’ve only gotten a tiny bit into season 2. So I, unfortunately, haven’t gotten to work with Derek just yet! I heard from everyone who worked with him that he is just the nicest and so insanely talented and so that makes me really excited to meet him! Olivia Rose Keegan is WONDERFUL. Funny enough, we met at an audition back in 2013 and so it was so cool getting to reconnect and even work together after all these years. She is really such a force and I’m learning so much from watching her. And she’s such a genuine, down to earth person. Really excited for all new and returning guest stars this season!

What’s working for Disney+ like compared to a traditional network?
JL: I haven’t really experienced the life as a full-time cast member outside of Disney, but they are always so wonderful to us. What’s really special is that they are such advocates for our safety and mental health, and they really take the time to be there for us and support us. I’m very very lucky they are so kind.

Absolutely love your posts on Pride (Congratulations to HSMTMTS on winning a GLAAD Media award!) and Black Lives Matter. Why are they so important to you?
JL: Yes! This recognition in particular hits home for a lot of us, so it was really touching to be honored in that way by GLAAD. Unfortunately, we aren’t really taught in school to not only be an ally but an activist. It’s so important to rewrite the narrative on how we support and lift those around us.

You have amazing fashion sense! Who/What is your inspiration?
JL: Oh wow thank you so much! Fashion has always been something I’ve been super interested in. I’ve gone my whole life being super experimental with clothing. I don’t really have a set inspiration but thrifting always gives me new ideas and tastes!