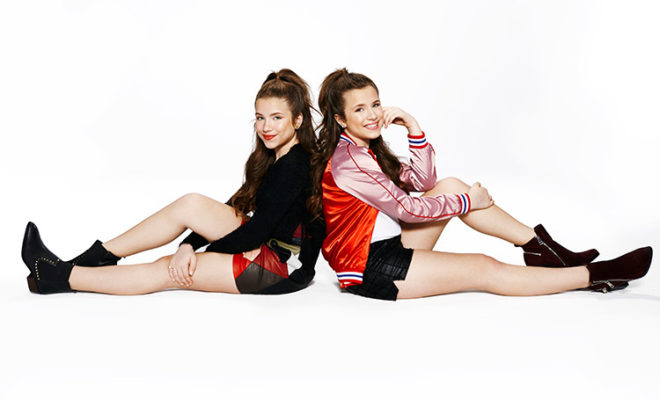 Bianca & Chiara D’Ambrosio just turned 13 last month. As toddlers they conquered television, as kiddos the music scene and now they’re coming to take over the internet!

Tell us about your Day In The Life series on YouTube.

We have so much fun doing A Day In The Life… It actually started because our lives are so crazy and we are always up to something, that when we would tell a friend what we had done all week, they would be super interested, laughing and wanting to know more. So much stuff happens on a daily basis, that we decided why not record it all? We had no idea so many people would be entertained by it. It’s pretty amazing! It’ really fun to share our daily lives with everyone, because we are so fortunate to have fun doing it. From recording, auditions, events and just hanging out with our friends.

Love seeing your dad in some of the videos! How big of a role do your parents play in your career?

Our dad… oh man! He’s hilarious. Dad totally is the funniest person we know. He’s so supportive of us in everything we do. We totally get our sense of humor from him. He always says that laughter is the best medicine, so we should always be healthy! Our mom is totally our rock and the best mom ever. She makes sure we get to where we are supposed to be and (like Dad) is super supportive and encouraging. She makes sure we are always on time, do our school work and legit, makes it all happen. We are so lucky to have them as our parents.

How did your collaboration come about with Brooklyn and Bailey?

We have been fans of Brooklyn and Bailey for years! We always watched their YouTube and followed them on social media. As twins, seeing how they are successful and so down to earth, is inspirational and encouraging. We have also been big fans of Squared. I mean, they created a platform showcasing twins! How cool is that? We first made contact with them when they commented and liked one of our posts and then had a few DM’s with them thanking them and just telling them how much we loved what they do. A little after that, Squared contacted us a couple times just to check in and say hi, which lead to us getting asked if we would be interested in joining the Squared family – of course it was a no-brainer for us! It’s an honor to be a part of Squared, especially with all the other amazing twins!

Are there any stereotypes or misconceptions about twins you hope to break?

That’s a great question. Well… we don’t always like exactly the same things. But, we do pretty much have twin-telepathy. We almost always know what the other is thinking, which is pretty hilarious.

The behind the scenes photos from “Sage Alexander: The Dark Realm” look like so much fun! What can we expect from the series?

It is so much fun being a part of this. It was great to work with Hayden Summerall again. We were already friends with Brooke Butler and Madison Hu, so working with people you already know doesn’t feel like work at all. We think everyone will love the series! It’s about adventure and fantasy.

All of this upcoming work is digital. How is it different compared to acting for a network on TV?

Being on TV is always going to be pretty amazing. We mean, it’s TV! But, digital has made it so much easier for people to stay truly connected. We love so many network shows, and binge watch whenever we’re not working. Riverdale is one of our faves! And, being on Nickelodeon this year with Nicky, Ricky, Dicky and Dawn was so cool… after all, it’s Nickelodeon! We also love digital shows like Liza Koshy’s Liza on Demand on YouTube Red. So, we guess it just opens the door for more projects to be made and seen.

And to think all of that is just one aspect of your career! Can we expect some new music in the future?

We are always doing something with music. We listen to it all the time and still have our music lessons. We’ve been super busy working on so many new projects since our last album, but we are hoping to the hit the studio soon to record more! When we were first starting out with music, we were doing a lot of covers (which we love), but our last single “Young and Free” we actually co-wrote it with Marko DeSantis from Sugarcult. He’s insanely talented, and we learned a lot from him! We for sure want to do more of that!

A big thank you (PART 1) to everyone who came to our birthday party yesterday. It was an amazing night! We are so fortunate to have these great people in our lives. Stay tuned for more posts 🙂 💙 XOXO B&C

You two recently turned 13 and had a beautiful birthday party! So far, what’s being a teenager like?

It’s such a milestone, right? Being a teenager is pretty amazing and how we went into it was just so epic. We had a big party with all of our friends, and Madison Beer sang us “Happy Birthday.” We don’t think it could have been any better!!