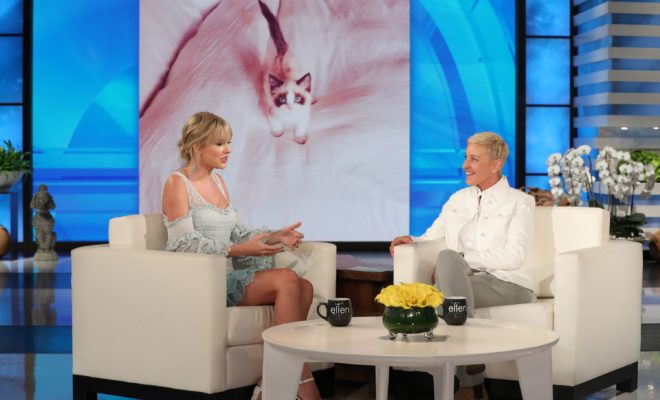 Taylor Swift sat down with Ellen DeGeneres for her first sit down interview in two years on Wednesday, May 15. Swift even asked DeGeneres to be in her new music video during the interview segment.

Swift tells DeGeneres about the phrase she coined, which explains her decision to not do press during the release of her last album, “reputation,” and shares she typically enjoys communicating about her music. Taylor explains the Easter egg hints she drops for her fans foreshadowing upcoming projects and addresses the rumor she was going to be part of the film “Avengers: Endgame.”

The singer-songwriter chats about filming the music video for her latest single “ME!” featuring Panic! At The Disco’s frontman Brendon Urie and reveals the French dialogue scene has a hidden meaning. Taylor tells Ellen about immediately falling in love with a kitten she met and adopted on-set, naming him Benjamin Button.

Swift confirms that her seventh studio album is done!

Then, the talk show host puts the country-turned-pop star in the hot seat to answer some of “Ellen’s Burning Questions.”Find out why Taylor eats like a “raccoon in a dumpster” at night, what her favorite TV shows are, and the most rebellious thing she did as a teenager, which involved her ex-boyfriend Joe Jonas. Plus, Taylor chimes in on the recent Twitter controversy on whether people wash their legs in the shower.